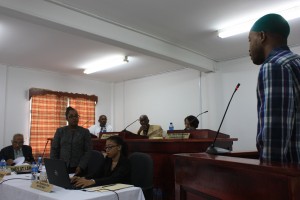 Thirty-nine-year-old Michael Lewis has told the Commission of Inquiry (CoI) into the Camp Street unrest that prisoners at the state penitentiary are treated like beasts.

In a written statement by the prisoner, it was declared that “Officers treat inmates like beasts.”

According to Lewis, if an inmate becomes ill it is not until after a loud ruckus is started in the prison to attract the attention of the “Chief” that the prisoners are allowed to go to the prison infirmary.

Otherwise, they are just told to “hold on” by whichever officer would be on duty at any given time.

Lewis also expressed his discontent with the meals offered to prisoners which he said sometimes included “bare tea.”

“Porridge and sometimes bare tea and tea bag, bare tea is tea without tea bag, water with sugar sir. Some Wednesday morning we would get bread,” he said later adding that lunch consisted of cook up with chunks.

“Sometimes you barely see couple strands of meat in the food,” said Lewis. 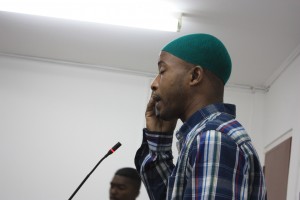 He however indicated that since the Commission of Inquiry started there has been some improvement and now prisoners can actually see the meat in their meals.

Bursting into tears while on the witness stand, Lewis also declared that no aid came from the police officers and others in the prison compound at the time of the fire that claimed 17 lives.

Still fighting tears, he recounted stepping over bodies and fighting for a hole to breathe clean air.

“He (Rayon Paddy) wasn’t in no fire and all he skin was already peel all hay suh white white white and he was a dark skin person…While I hustling to go back to my door space an Amerindian chap was there I had to hold he foot and pull he back to get my space,” said the inmate. (Jomo Brusheildon Paul)