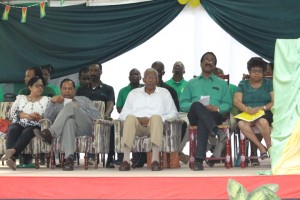 As the days remaining before Guyana hosts Local Government Polls, President David Granger has reaffirmed the APNU+AFC Coalition’s push for control of both central and local government authorities.

Backed by Prime Minister Moses Nagamootoo, the duo delivered a resounding call for persons to cast their ballots in favour of the coalition’s candidates in the upcoming elections.

Addressing a sizeable crowd at the Linden bus park on Monday afternoon, the President declared that the electors must finish what they started and put local governance in the hands of APNU+AFC candidates.

In the bid to endorse over one dozen APNU+AFC candidates vying for posts in the Linden municipality, the President said that the electorate should not vote for persons without any linkages.

Rather, the ballot should be marked in favour of those candidates that would have connections within the current APNU+AFC administration.

He pointed out that some independent candidates can vie for posts on their own, which is entirely their choice. 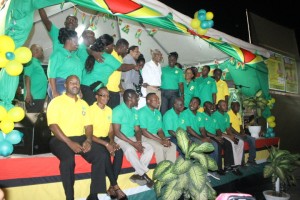 “Some people want to ride off into the sunset by themselves well leh them guh,” the President stated adding “When they come to you, ask them who will support you, where’s the structure, where the institution, can you speak to the minister of communities if I want a house, can you speak to the minister of public infrastructure if I want to fix my roads? If you say ‘no,’ then me nah vote fuh you. I’m voting for people who are well-connected.”

In his charge, the President was clear that the APNU+AFC was seeking to dominate governance structures in the region and other parts of the country as far as possible.

Prime Minister Nagamootoo for his part stated that LGE will be a “referendum” for the government by the electorate as a form of test as to how the government has performed during its 10 months in office thus far. 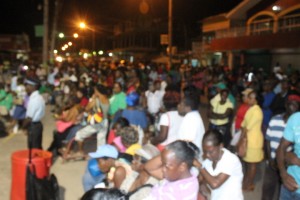 Political tsars have expressed mixed view on the government’s performance with one major point of criticism bring the decision to increase ministerial remuneration packages.

“This is about expressing your confidence in the decision you made last year, ten months ago, that the people you put into central government have shown you the light, have shown you the example that it is worth giving the power to others under the banner of the APNU+AFC in your local communities,” said the Prime Minister.

He said too that voting for the APNU+AFC candidates will ensure succession along Party lines since it gives the young leaders some amount of “apprenticeship.”

“You may say we win this already, the coalition is on top but this not only about the election. This is about sending a message to Guyana and the rest of the world that you have voted confidence in the leaders that you elect. This is a referendum on our government and you go there and you vote for the APNU+AFC,” said Nagamootoo.

Previous: Guyanese agriculturalist, who once worked in Montserrat, killed
Next: Prisoners treated like beasts – CoI hears