Antigua-Barbuda prepares to join Guyana, others at Caribbean Court of Justice 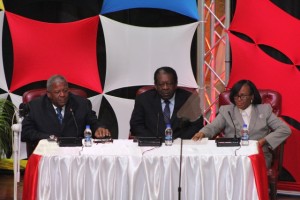 Antigua and Barbuda appears poised to join Guyana and several other Caribbean Community (Caricom) member-states in having the Caribbean Court of Justice (CCJ) as the final court of appeal.

A three-month public education campaign was launched on Thursday in that twin-island nation as the government prepares to hold a referendum to determine whether to replace the London-based Privy Council as its apex court with the Trinidad-based CCJ.

The campaign, which has bi-partisan support, will span three months on a budget which government said will exceed 2 million Eastern Caribbean dollars.

While no date has been set, the government hopes to hold the referendum in June.Already using the CCJ as their final court of appeal are Guyana, Barbados, Belize and Dominica.

Demonstrating a united front, Prime Minister Gaston Browne and Leader of the Opposition United Progressive Party (UPP) Baldwin Spencer who were both at the head table at the launch, urged the electorate to choose the CCJ, contending it will provide easier access to justice.

Supporting Spencer, PM Browne made “a clarion call for all registered voters in Antigua and Barbuda to support this important institution of regional Governance and sovereignty.”

He said the current final appellate court “is clearly an outmoded colonial construct that was designed exclusively for the wealthy few and has failed to provide broad-based accessibility and dispensation of justice to the masses.”

Elaborating on Spencer’s point on access to justice, PM Browne said justice is not only delayed because of the remoteness of the Privy Council but, in many instances was denied because of inaccessibility associated with the prohibitively high costs.

“Even today, justice is being denied to the majority of our people who find it cost-prohibitive to take their case to the Judicial Committee of the Privy Council,” he said.

“Having the CCJ as an all-inclusive final appellate court, will cure this egregious injustice of exclusivity that has plagued us since 1834,” Browne said, while adding that the fact that the CCJ is an itinerant court (travelling court) will help offset costs for litigants.

Former attorney general Justin Simon QC noted that between 2007 and 2014 about a dozen cases from Antigua and Barbuda were taken before the Privy Council, while over 30 cases were taken before the CCJ which was inaugurated in 2005 and which also serves as an international tribunal interpreting the Revised treaty of Chaguaramas.

Simon said the statistics suggest there is a serious problem of a lack of access to justice as he pointed to two cases where litigants spent hundreds of thousands of dollars to cover legal expenses before the Privy Council.

In a video message, Caricom Secretary General Irwin LaRocque also expressed support from the proposed move, stressing it will “complete the country’s circle of independence.”

He said the court was set up with the highest levels of international standards and steps were taken, and remain in place to ensure there’s no political interference in the management and operations of the court.

According to him, the CCJ is also staffed with some of the “highest intellectual minds” and “there’s no other court in the world as independent” as the CCJ since it is funded under a unique trust fund arrangement and does not have to rely on governments for money.

Another point noted was that the judges are not appointed by the heads of government.

CCJ President Sir Dennis Byron, who applauded the main opposition UPP and the ruling administration for dealing with this issue with “political maturity”, said there’s no evidence justifying public concern of political interference, while he highlighted that the “high quality” judgments of the court are readily available for public perusal.

Explaining the system used to ensure the financial independence of the institution, he said, “The financial arrangements of the court included the establishment of a trust fund where member states invested US$100 million with the expectation that the interest of that investment would fund the court in perpetuity.”

Meanwhile, head of the education campaign mission, Ambassador Dr Clarence Henry said in order for the national referendum to be executed, elections rules must be drafted and that is currently being done by Dr Francis Alexis, a constitutional lawyer based in Grenada.

“He has been provided with all necessary legislation from which draft rules for the referendum will be drawn, in consultation with the Antigua and Barbuda Electoral Commission and there’s also a parliamentary process to be followed,” he reported.

On Friday morning, there will be another session which will be led by youths. Henry said the aim is to ensure the public is sensitised adequately to participate in the referendum which requires a two-thirds favourable majority to allow for the move from the Privy Council to the CCJ.