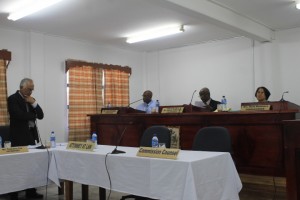 The Guyana Bar Association (GBA) was moments ago granted permission to have full participatory rights in the Camp Street Prison Commission of Inquiry (CoI).

The application was made by GBA President Chris Ram and granted by the Chairman of the Commission Justice James Patterson.

Ram in his application detailed that the CoI will have direct substantial impact on the legal fraternity hence the body felt the need to be a part of the CoI.

He stated that the association is the authorized national body that speaks on behalf of lawyers in Guyana hence there is no reason why the application should not be granted.

Further to his point, Ram said that the GBA may be able to provide some assistance to those persons appearing before the Commissioners and may not be able to afford legal counsel.

Justice Patterson asked whether the members of the GBA, would be willing to offer their services “pro-bono” to which Ram responded that an email was sent to the members asking that they do such.

The application was then granted by the Chairman. To facilitate the new developments, Friday’s sitting of the Commission was adjourned and the two prisoners who testified on Thursday are expected to reappear at the next sitting.

He indicated too there were other concerns pointing out that  some of the questions were leading questions “that ought not to have been framed the way they were framed so I am pretty concerned.” (Jomo Brusheildon Paul)