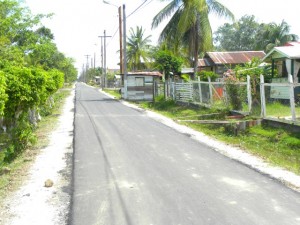 Works in ‘E’ Field, Sophia have been completed as the Sophia Ring Road Project, which seeks to link ‘A’ through ‘E’ fields, continues to progress smoothly,  the Ministry of Public Infrastructure said Thursday.

The works in Cummings Park, ‘E’ Field were recently completed by the contractor, Ivor Allen, and the area now boasts about 1,500 metres of asphalted streets. Additionally, 30 streetlights were installed along the stretch of road and will soon be powered following the “go ahead” from the Guyana Power and Light Inc. (GPL). The only outstanding works in the area is the installation of a culvert.

Meanwhile, in the other fields, the  ministry said works are moving apace. Contractor B&J Civil Works has already commenced works to create a middle linkage between ‘A’ Field to ‘B’ Field and linkages in ‘B’ Field to ‘C’ Field and ‘C’ Field to ‘D’ Field.

Another linkage towards the southern extremity of ‘A’ Field is also being created by contractor Courtney Benn Contracting Services, according to the Ministry of Public Infrastructure. “This contractor is also responsible for the repair of the ‘A’ Field access road and this work will soon be graded and shaped in preparation for the crusher run and subsequent asphalting. This southern linkage will provide an additional route for residents of ‘A’ Field to provide greater comfort and accessibility,” the ministry said in a statement.

Additionally, the project will see the creation of more bridges and already two have been completed to provide access to Plum Park, Sophia.

The first of these works commenced in January 2016. Though there had been a few hiccups, including the presence of Guyana Water Incorporated (GWI) water mains, these obstacles have been removed and all works are expected to be completed within eight weeks.

During his presentation of the 2015 Budget, Minister of Finance, Winston Jordan, had stated that the Government of Guyana would invest $387 to upgrade the Sophia Ring Road in a bid to link the Sheriff Street/Mandela Avenue urban development to peri-urban communities.

2016-03-10
Denis Chabrol
Previous: Third person charged with murder of city businessman
Next: Antigua-Barbuda prepares to join Guyana, others at Caribbean Court of Justice