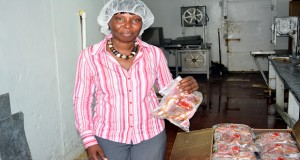 Allison Butters-Grant holds a parcel of processed fish which her company produces for local and overseas markets. (Guyana Chronicle photo)

In a bid to revive coastal village economies, cultural organization, African Culture and Development Association (ACDA) is taking the lead in reviving and creating several industries that will boost economic village activities.

The dormant billion -dollar artisanal fishing industry is being touted as the first area of interest even as the agency works to provide assistance in other sectors. ACDA has invited persons living on the East Coast of Demerara to an important meeting this Saturday at the Victoria Primary School, 13:00hours to discuss how the fishing sector could go ahead.

Villagers will express their interest in this venture before further discussions are held to ascertain their immediate requirements.

Allison Butters, who was invited by ACDA to Chair its fishing committee, describes the upcoming event for the purpose of “gap analysis”. She told Demerara Waves Wednesday 9 that in returning village economies, ACDA aims to boost certain village industries and they are starting off in the area of fishing.

Butters, who owns a local fish processing plant; Global Seafood Distributors said the industry is a very lucrative one. “The artisanal fishing industry is a billion dollar one where demand is greater than supply both in the Caribbean and the international market.”

She said that more suppliers are needed in this area and the agency hopes to attract as many interested villagers this Saturday.  The ‘gap analysis’, she continued, will allow ACDA to determine what is available to the participants and what is not. Various support systems will then be employed to provide the necessary assistance. It is thus expected that Saturday’s meeting will bring out a range of stakeholders including banking and other financial representatives in case possible favourable business transactions may commence on spot.

Other support systems will see persons utilising the provided opportunities being afforded the chance of bettering themselves personally. “For example,” Butters explained, “A fishermen might not have been able to complete his formal education, he can get help in areas of basic English, Mathematics etc.so he can be more business responsible.”

ACDA’s move to revitalise the village fishing industry comes under a widely -felt notion that over the years, village economies have been allowed to dwindle with business tycoons getting first jump at available economic opportunities.

The fishing initiative also comes two years after panic struck the local industry when word got out that 40 fishing licenses were going to Chinese nationals. Not only were the foreigners’ equipment and the magnitude of operations expected to outdo locals, but they were getting these licenses when locals were ordered to limit their fleets and activities because of dwindling stock. A media report breaking this story and public pressure forced the delay and subsequent fall of the deal.

ACDA is expected to place its energy in other sectors such as Information Technology sector, banking and agriculture among others. Rudy Guyan, Neilson McKenzie, Royston Peters, and Simpson Da Silva are among other persons pushing the growth of these village economies.