City businessman shot while attempting to intervene in robbery 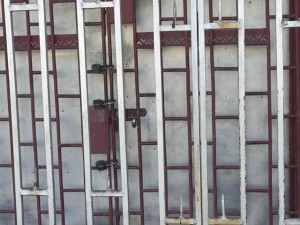 THE LOCKED DOOR of GA Shortt Imports following an armed robbery nearby. The owner was shot by one of the bandits.

A businessman was shot by bandits Wednesday afternoon when he attempted to intervene in a robbery nearby his business premises on High Street, Werk-en-Rust, Georgetown.

Police said the  owner of G.A. Imports saw a robbery in progress and went inside for his licensed firearm. On returning, one of the bandits opened fire on him. “As soon as he returned to the front of the business, one of the two suspects opened fire on him and he received two gunshot wounds to his left foot,” Head of the Criminal Investigations Department of the Guyana Police Force, Senior Superintendent Wendell Blanhum told Demerara Waves Online News.

Blanhum said the businessman did not lose his firearm.  He added that the robbery victim did not report the matter to the police.

A representative of the business enterprise said the victim was robbed of an undisclosed sum of cash in the vicinity of Silvie’s General Store which is located next door. 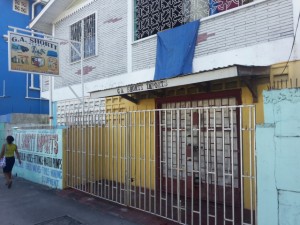 SHUT: GA Shortt Importers, High Street, Werk-en-Rust, Georgetown after the owner was shot by bandits who robbed a man nearby.

Investigators were reviewing surveillance footage with a view to apprehending the perpetrators.

Shortly after the incident, G.A. Shortt Importers was closed for the remainder of Wednesday.