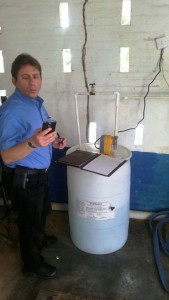 The Guyana Water Incorporated (GWI) Wednesday said it has commenced evaluating a food based agent, Seaquest, which has the ability to improve water quality by reducing the effect of iron present in water.

The programme is part of GWI’s overall water quality improvement programme being executed by the company’s Scientific Services and Technical Services Departments.  The product is being evaluated in the communities of Goed Fortuin, West Bank Demerara, Agricola, East Bank Demerara, Clonbrook, East Coast Demerara and Ithaca, Berbice.  These communities were deemed ideal for the testing of Seaquest because the content of the water received by residents is high in iron.

GWI Chief Executive, Dr. Richard Van West-Charles and the project team attended meetings in the aforementioned communities in order to provide information to residents on the Seaquest product.

According to Scientific Services Manager, GWI, Donna Canterbury, ‘Seaquest is a food based agent which has the ability to chemically disable the iron present in water from oxidizing’.

The product has been approved by the United States Department of Agriculture (USDA), the Drinking Water Inspectorate, London and has been certified by NSF International (National Sanitation Foundation), United States.  It is safe for consumption by humans and animals.

Seaquest is a product of Aqua Smart Incorporated, a United States based company which facilitated several presentations for GWI and will be assisting with the application of the product in the communities identified for the pilot studies.

‘The product has been shown to significantly reduce the effects of iron present in water such as discoloration,’ stated the Scientific Services Manager, ‘if these pilot tests are successful we can anticipate substantial improvements in the quality of water distributed by GWI’.  The product has been utilized successfully in a number of countries including the United States, Belize and the Bahamas.