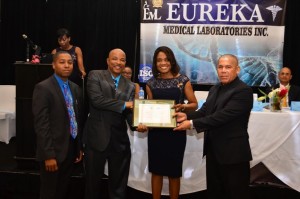 Eureka is the first medical laboratory in Guyana to be internationally accredited.

Eureka Medical Laboratory is now certified to conduct testing and medical research that is equal to international standards. The company, owned by Guyanese, announced the accreditation from Jamaica National Agency for Accreditation at a ceremony at the Marriott Hotel on Saturday.

Eureka’s accreditation by the ISO boosting the recognition of the quality of its services at its main branch and seven satellites countrywide. This makes Eureka the first medical laboratory in Guyana to be internationally accredited.

Company, CEO William Boyle said that the feat was no ordinary achievement, “we had become the first and only medical laboratory in Guyana to have achieved this coveted accolade.”

He said that Eureka has several new plans in the pipelines which include switching to solar energy.

“We have lots of developments in the pipeline but accreditation was one big hurdle…we are hoping that on April 24 the entire Eureka will be solar powered,” said Boyle.

Meanwhile, Health Minister Dr George Norton who was present at the ceremony stated that Eureka is an establishment that is progressing and has managed to build s reputation of providing Guyanese with quality service.

He charged that the laboratory should now take patient care in Guyana to the next level raising the barrier for other local institutions.

“This means that you can take patient care to the next level and that is what your objective should be; to take patient care higher than it was before…I applaud you for this and I urge you not to become complacent,” said Dr Norton.

Founded by Dr Karen Gordon-Boyle and Andrew Boyle on March 5, 1995,  Eureka started with  only two staff and offered a limited range of tests, almost all performed manually.

Since then, “Eureka” has grown exponentially, offering a wide range of services at branches located in New Amsterdam and Rose Hall in  Berbice, Anna Regina, Charity, Bartica, Parika, Linden and St. Vincent.