Cultural hurdles need to be addressed for gender equality – President 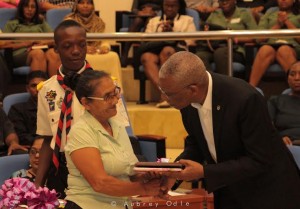 As Guyana joined the rest of the world in observance of International Women’s Day, President David Granger declared that over the last forty years Guyana has made significant progress but some hurdles remain.

The President made the comment at a Women’s conference at the Arthur Chung International Conference Center (ACICC).

Granger told the room filled with women that Guyana, for the most part, has the necessary legislative framework to foster gender equality.

“The legislative architecture for gender equality is intact, what is not intact is the attitudinal and behavioral architecture,” the President said adding “what we need now is the operationalizing of all of these laws and conventions.”

To do this, Granger suggested that Guyanese sit down and have conversations on how they could change patriarchal cultural norms that have been a trademark of Guyana’s society.

“So many things are imbedded in our culture in our minds that legislation cannot change…It is something that we need to confront,” the President said.

The Head of State lamented that Guyana intends to achieve gender equality and empower all women and girls but the country still has a far way to go.

But he was clear that whatever changes need to be made can be achieved by 2030, accordance with United Nations development goals.

“We believe that the barriers to gender inequality, those barriers that are associated with geography, job opportunity political affiliation can be broken down in less than 14 years,” said Mr Granger.

Meanwhile, Social Protection Minister Volda Lawrence proclaimed that Guyana must strive for a future where all are equal.

“We must commit to a future where women are equal, where individuals’ rights are not violated because of their sexual persuasions and orientations, where remuneration is fairly structured and access to resources is free of gender bias…let us pledge to change mind-sets, expand opportunities and channel our energies to effect the change that will result in the transformation of lives,” Lawrence declared.

She pointed out that Guyana, as a society, remains challenged by, male chauvinism, discriminatory practices, sexual violence, abuse, human rights violations, denial of opportunities to work and be educated, non-recognition of our labor in the home, and disrespect by men among others.

During the conference, close to 70 women from across Guyana were awarded for their contributions to society.