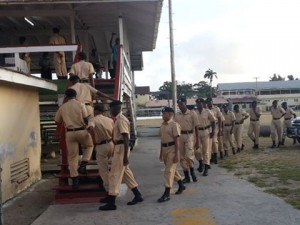 Voting in Local Government Elections (LGE) by members of the Disciplined Services across the country on Tuesday appeared smooth, according to assessments by several parties and groups except the opposition People’s Progressive Party Civic (PPPC).

Reports are that voting was smooth and calm in Linden, Berbice and Essequibo.

The Guyana Elections Commission (GECOM) also reported that except for minor glitches there was “nothing deleterious” that prevented police, soldiers and members of the prison service from casting their ballots.

Concerns by the PPPC that many persons voted without identification cards and instead relied on GECOM’s folios to do so were brushed aside by Deputy Chief Elections Officer, Vishnu Persaud. Calling the PPP’s press statement on the matter “a non-release,” he said the law was very clear that persons could cast their ballots without a form of identification.

While Persaud said it was too early to indicate what was the voter turn-out among the almost 7,000 eligible voter,  Mark Benschop of Team Benschop and Martin Gaul of the Guyana National Building Corps (GNBC) said the turnout in Georgetown appeared less than 50 percent.

Leonard Craig of the Alliance For Change (AFC) told Demerara Waves Online News said based on preliminary information, voting went well. “From the reports that I have gotten the process was smooth. The administrative processes in the polling stations themselves seemed to be excellent and I cannot comment at this time on what I think should be improved until I have a comprehensive review of the day,” he said.

Benschop attributed his estimated 40 percent voter turnout at the LGE to little interest in the polls and not any problems. “We have not encountered any hiccups. We think the process was smooth; not that it is perfect but we are satisfied thus far,” he said.

GNBC’s Gaul believed that the “very low turnout” estimated at about 50 percent was due to the inability of voters, for instance at Brickdam Police Station, to find their names readily on the voters list and a lack of voter education. “I spoke to a couple of officers and they don’t know who is running in their area and they were not able. Apparently, there was no sufficient campaigning by the individuals, groups and parties so because they lack that knowledge they were least interested,” he said.

Team Legacy’s Michael Leonard said everything went well for voting by the Disciplined Forces. “We are relatively pleased with the process today. We didn’t hear of any issues at any of the polling stations,” he said.