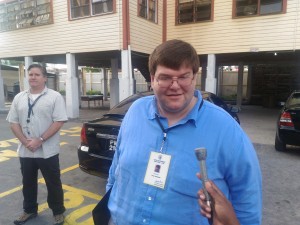 Charge D’Affaires of the United States embassy in Guyana observing the Local Government Elections at the Brickdam Police Station.

American Embassy observers have given Tuesday’s balloting in Local Government Elections by members of the Disciplined Services a clean bill of health but say a number of areas need to be addressed ahead of voting by civilians next week Friday.

“The Embassy team of observers found nothing to question the integrity or credibility of this critical phase of the voting process and the Guyana Elections Commission is to be commended for its logistical arrangements for this phase of the process,” the US Embassy said in a statement less than one hour after polls closed at 6 PM.

With a low voter turnout in some areas and a “sizeable number of electors” going to the wrong polling station, the US Embassy Observers urged GECOM and other stakeholders would go the extra mile in educating the public. “A sizable number of prospective voters in some areas arrived at the incorrect polling location or without national identification cards,” the diplomatic mission said.

The opposition People’s Progressive Party Civic (PPPC)  also made a similar observation that many persons voted without national identification cards, a concern that has been brushed off by GECOM on grounds that they are not absolutely required for someone to vote. Each polling station, GECOM has said, has a folio containing all the required identification information.

“Even so, these observations point to the need for all stakeholders to redouble voter education and mobilization efforts in advance of the March 18 general vote. It is our Observer Team’s hope that civil society, media organizations, and political parties will play a key role in this regard.”

GECOM was praised for the remedial action taken to ensure that electors cast their ballots in Guyana’s first local government elections in 23 years. “In addition Guyana Elections Commission procedures were wholly adequate to deal with these eventualities, and the polling staff performed admirably in ensuring the integrity of the process while avoiding voter disenfranchisement,” the embassy said.

In congratulating Guyana and GECOM for the successful conclusion of voting by police, soldiers and prison service personnel ahead of voting by civilians on Friday, March 18, 2016.

Team Benschop and the Guyana National Building Corps estimate the turnout at below 50 percent.

The US Diplomatic Mission here pledged to continue working with other observer groups throughout the local government elections process and will again have teams in the field on March 18th when the general public has the opportunity to vote. The Embassy encourages all Guyanese citizens to participate in this historic election.