Legal Affairs Ministry likely to buy nearby land for extension 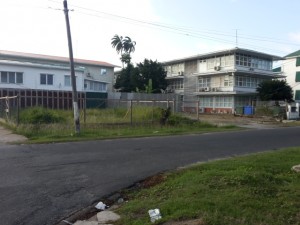 The two plots of land at the corner of Middle and Carmichael Streets. In the background at right is the building housing the Attorney General Chambers and Ministry of Legal Affairs.

The Guyana government is eyeing two plots of land to expand the building that houses the Attorney General’s Chambers and Ministry of Legal Affairs.

He told the House that GYD$40 million have been budgeted to buy the land at GYD$20 million each, in addition to GYD$750,000 for roof repairs to the existing building.

Williams said eventually the extended building would house a permanent Law Reform Commission. Funding for that new commission is expected from the Inter- American Development Bank (IDB) either late 2016 or early next year.

Shadow Attorney General and Minister of Legal Affairs, Anil Nandlall remarked that “twenty million dollars for a plot of land on Middle Street is remarkable but I wish my friend all the luck.”

Nandlall was Attorney General and Minister of Legal Affairs up to 11th May, 2015 when his PPPC lost the elections.