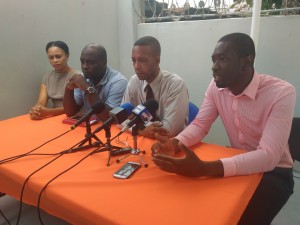 Mark Benschop (centre) flanked by other members of his team for the Local Government Elections.

According to Mark Benschop a Mayoral hopeful, his team  “strongly objects to Mr Robeson Benn being a commissioner at  GECOM and a candidate for the local government elections.”

Benschop says that Benn should do the “honorable thing” and relinquish either of the two postings.

He said that while there are now laws directly preventing Benn from contesting LGE it should be pellucid that it presents a conflict of interest.

“We cannot understand how this could have slipped through the cracks at GECOM,” he added.

Already the team has a meeting planned with GECOM officials to discuss the way forward.

Asked how long the glitch was noticed, Benschop said it was noticed a while but the Team awaited the official publication of the lists before making a statement.

“We want the right thing to be done…we want transparency…other parties should have already voiced an opinion on the matter,” he stated.

Efforts made to contact the General Secretary of the PPP Clement Rohee on the issue proved futile.