Former Prime Minister, Samuel Hinds Saturday warned that the movement of billions of dollars from a number of state-owned entities and commercial banks to the Consolidated Fund and subsequent spending would once again lead to an economic downturn.

“The danger is that it would be used to raise recurring current expenditure to unsustainable (at this time) levels putting us at risk of again getting on a path to a downward inflationary spiral such as we got on soon after Independence and only very painfully began working ourselves out of in the late 1980s,” said Hinds in a letter to the media.

Hinds, who also served as President for a brief period, further cautioned against the withdrawal of billions of dollars from commercial banks and their deposition in the Consolidated Fund would affect lending.  “Additionally, more immediately, the stated intention to withdraw all these billions in accounts in the banks would reduce the ability of the banks to lend and further constrain our economy,” he said.

He said the PPP/C and Guyanese across the political spectrum hope that those dangers would be avoided. No one would want a return to the 1970s and 1980s. 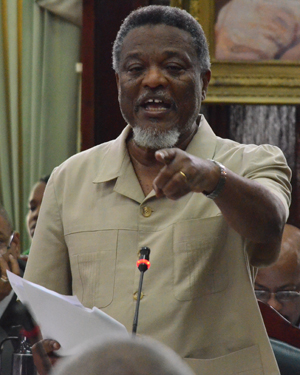 That period had been characterised by double-digit inflation, devaluation of the Guyana dollar, high interest rates and the banning and restriction and shortage of basic food items and other basic necessities such as toilet tissue.

He also denied that the People’s Progressive Party Civic (PPPC)-led administration hid billions of dollars in secret bank accounts, saying that they were actually the accounts of autonomous and semi-autonomous agencies like the Guyana Geology and Mines Commission (GGMC).

“First, those accounts were not unknown, not hidden, not secret, not unlawful. Second, the fact that there are billions in these accounts should raise questions about whether there was any stealing at all,” said Hinds, a former Chairman of the Privatisation Unit/NICIL.

The former Prime Minister suggested that the 23-year long PPPC administration had no apology to make for spending monies from agencies like the GGMC for “off-set budget financing” for some time after assuming office in 1992. “And yes, particularly in the earlier years we needed to and did use such accounts for what is known internationally as “off-budget financing”. In our first years, Guyana’s economic position was so bad and the international strictures on various budget ratios so tight, we had to have the GGMC fund maintenance of the air corps of our GDF, as prepayments for servicing greater monitoring of mining across our hinterland. Again, with a good reason in hand I had the GGMC fund the extension of the MMC minibus-grade trail into Madhia transforming the outlook and prospects for that community.

Whatever the wrongdoing in such actions, I and members of the Cabinet then, are ready and willing to pay the price. We of the PPP/C, citizens of Guyana, no more so or less so than others, hope that those dangers would be avoided. No one would want a return to the 1970s and 1980s,” he said.

Apparently countering claims by the APNU, AFC and former Auditor General, Anand Goolsarran that PU/NICIL had allegedly violated the law by not transferring billions of dollars to the Consolidated Fund, Hinds said the records show differently. “It is an achievement of note that there are surplus funds in bodies which before drew from the Consolidated Fund…the records would show that without fanfare, billions of dollars had been transferred steadily, from time to time over the years to the CF from these accounts including the accounts of PU/NICIL,” he said.

The former Prime Minister echoed sentiments by former President Donald Ramotar that Brassington has not violated any law. “What evidence is there? In all that I have seen and heard I have not sensed any criminal act: there is no indication ofany money flowing to any of their pockets. The CEO’s crime (and that of PU/NICIL as an institution along with all its employees) seems to have been that he did his able best to carry out the policies and programmes of our PPP/C administration, accepting them and pursuing them rather than taking his cue from the then opposition,” he said.

Instead, he praised PU/NICIL for playing a major role in bringing a number of projects like the Marriott Hotel to fruition, despite criticisms and allegations by APNU and AFC in opposition and government.