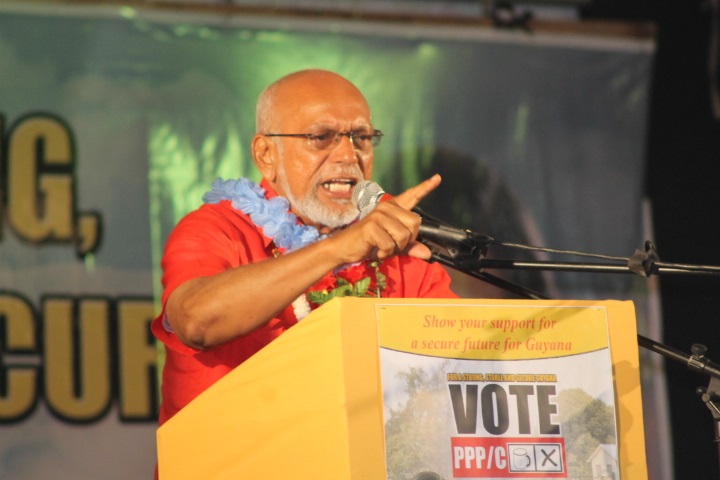 In the face of threats by government to go after former Finance Minister, Dr. Ashni Singh for the spending of GYD$4.5 billion from the Treasury without parliamentary approval, former President Donald Ramotar is sticking by Singh.

“The fact of the matter is that Ashni Singh did nothing wrong and acted legally,” he said in a statement.

Government had spent the monies from the Contingencies Fund at a time when the Parliament had been prorogued and subsequently dissolved to avoid a combined opposition no-confidence motion.

Ramotar accused the A Partnership for National Unity+ Alliance For Change (APNU+AFC) coalition government of using the coercive arms of the State to “embark on a dangerous path” by going after opposition politicians and persons like the Head of the National Industrial and Commercial Investments Limited (NICIL), Winston Brassington.

The privately-owned Kaieteur News newspaper quoted Public Security Minister and AFC Leader, Khemraj Ramjattan as saying that “nothing came out of the case when I first carried it, but I have all intentions to check on the status of it and have it reopened and followed up on. The $4.5B spending remains, in my view, a case of illegal spending, and that is my legal opinion. The financial laws of this land were not meant to be broken.”

Ramotar, who was President from 2011 to 2015, noted that the Director of Public Prosecutions (DPP), on the basis of a complaint by Ramjattan, had found no reasonable ground to institute charges against the then Finance Minister and the High Court had ruled that he had not violated the Constitution. “Moreover, I wish to point out that the monies were used to promote the economic development of Guyana and to enhance the welfare of our people,” said Ramotar.

Ramotar charged that the six-month old government has clearly embarked on a witch-hunt. “It is pure harassment of Dr. Ashni Singh and his family. It is a crude tactic to try to embarrass a gentleman who made an outstanding contribution to our country’s development,” said the former President.

Warning every public servant and every citizen that they would be “subjected to the same harassment and victimization,” he called on “democratic and peace-loving forces to make their voices heard and to stop this abuse of our institutions for narrow political objective.”

He suggested that the current state of affairs was synonymous with the People’s National Congress (PNC) regime under then Presidents Forbes Burnham and Desmond Hoyte. The PNCR is now the largest constituent in the coalition administration.

In the case of Brassington, the former President said Brassington has been subjected to “vicious attacks” on Brassington who had answered all questions given to him by the auditors and fully cooperated with them and publicly provided explanations for every single query raised by the auditors. “Despite this, his office was raided in his absence and files taken away.”

Brassington has denied wrongdoing and has said that all allegations should be tested in Court.  He has said that he had complied with all laws and legal directives by the Cabinet on several major projects.

The Head of NICIL has been sent on administrative leave to pave the way for another audit by the Auditor General’s Office which had previously cleared that holding company of State assets and given it a clean bill of health.

Former Auditor General, Anand Goolsarran has said that his forensic audit has uncovered several alleged irregularities and breaches of the law.