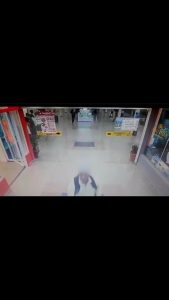 The Guyana Telephone and Telegraph’s (GTT) kiosk on the lower flat of Giftland Mall was Monday night robbed by two youths armed with a gun.

Police were up to late Monday night interviewing two GTT staff members who were at the kiosk when one of the men grabbed a large sum of money.

His accomplice was busy brandishing what appeared to be a handgun as he urged the other man, with the money, to exit Giftland Mall swiftly.

Customers who were in a queue waiting to pay bills quickly scampered away to GTT’s branch upstairs.

Harris said “we are still trying to assess our losses.” Harris added that no one was hurt but the staff was “shaken up.”