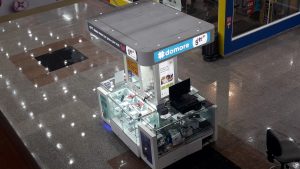 The GTT kiosk that was robbed Monday night, 10th February, 2020.

The Liliendaal, Greater Georgetown-based Giftland Mall says its security guards were unable to respond to the armed robbery of the Guyana Telephone and Telegraph kiosk Monday night because authorities have not approved the company’s application for at least two of its guards to carry guns.

Noting that the robbery was the first of its type since the mall opened four years ago, Giftland says guards were unable to respond because its application for arming its head and deputy head of security has been denied by the authorities.

Further, Giftland says their recommendations for supernumerary accreditation have been stuck in the system for the past few years.

Giftland says despite its repeated request to be able to properly protect the mall and patrons from armed attempts, its pleas have fallen on deaf ears.

“We must admit that some security concerns need to be addressed moving forward in regards to the incident yesterday (Monday) and these will be dealt with to limit these types of robbery attempts,” Giftland added.