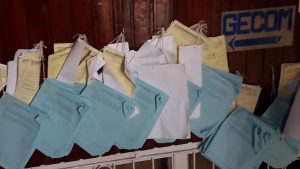 The Guyana Elections Commission (GECOM) has defended its decision as legal to change the addresses of persons who were registered during the July-August, 2019 house-to-house exercise.

“The Commission is urging the electorate to be extremely vigilant of the attempts by a few to create confusion, mischief and derail the level of public confidence in GECOM to conduct free, fair, transparent and credible elections. GECOM is working in the best interest of the electors,” the body said in a statement.

GECOM’s position is in apparent response to concerns by the opposition People’s Progressive Party (PPP) that the elections management agency has no legal right to make such wide-scale changes outside the statutory deadline and rules.

PPP General Secretary, Bharrat Jagdeo has publicly called on foreign technical experts attached to GECOM to take a sample of 10,000 registrants and conduct a field test to verify accuracy of the changes. “Now that these changes have been made, the international technical assistants plus the other observers must verify, along with others, these changes to see that they do not cause what could effectively be disenfranchising people… and this has happened in GECOM without scrutiny from anyone,” he added.

It states, “If within the period of twenty-one days after he had certified lists, the Commissioner is satisfied that any entry or omission in any list as revised pursuant to regulation 35 is incorrect through inadvertence in the course of such revision, he shall make or cause to be made the requisite correction to that list and such copy thereof as is open for inspection at any registration office and the Commissioner shall give to the person to whom such correction relates notice thereof, which may be sent by registered post to his last known address.”

According to GECOM, it is confident in its system which is vital to ensure that persons who would have had changes done to their addresses, during the house-to-house registration exercise is in accordance with the law and does not fall outside of the statutory period.

GECOM says it has a duty to ensure that the information of all electors are accurately reflected on the Official List of Electors to avoid confusion.

If that process is not done, GECOM says electors will have to travel to their old addresses to vote. This, GECOM says, can cause those persons to be displaced and disenfranchised which could result in low voter turnout and questionable election results.

GECOM vows that it will not disenfranchise thousands of eligible electors who participated in the house-to-house registration exercise. The elections agency says it is perturbed by recent attempts to discredit GECOM’s work to produce a credible voters’ list by peddling false accusations.