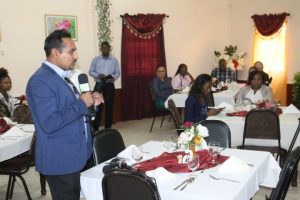 President of the Tourism and Hospitality Association of Guyana (THAG), Mitra Ramkumar addressing staff and students of Carnegie School of Economics.

President of the Tourism and Hospitality Association of Guyana (THAG), Mitra Ramkumar says the emerging oil and gas sector is boosting hotel occupancy, even as his organisation is preparing to give graduates of Carnegie School of Home Economics internship and job opportunities.

Ramkumar, in an address to mark the reopening of Carnegie’s Hibiscus Restaurant for the new school term, noted that almost all the major hotels are fully booked by guests who are coming to Guyana in connection with the oil and gas sector.

“Tourism and oil mesh well. They support each other in that I can tell you…All of the major hotels in Georgetown…are either full or in their eighty percent occupancy and that is an off-spin from the oil and gas and that is what I am talking about when I say the two industries complement each other,” said Ramkumar.

The THAG President cites the high occupancy rate to point out that all Guyanese cannot work on the offshore oil rigs. He told students and staff of the Carnegie School of Home Economics that they are poised to gear up for the spin-off from the oil and gas sector. Mr Kumar says THAG will be keeping a register of graduates from Carnegie for internships and vacancies in the hospitality sector.

“The Tourism and Hospitality Association of Guyana is working with Carnegie in developing attachments and so when you come to do a programme, you will not only be able to do the theory but then you’ll have an attachment at a hotel, at a restaurant to get that practical, grounded experience.

“Another aspect of it – we’ll be developing a database of persons that would have come and done training at Carnegie and so, as the need arises, from our members and operators in the industry, they will now reach out to these persons who had been trained,” said Ramkumar.

Sections of the private sector and the political opposition have been railing against Trinidad and Tobago companies and other extra-regional providers who have been coming here at the expenses of trained Guyanese.