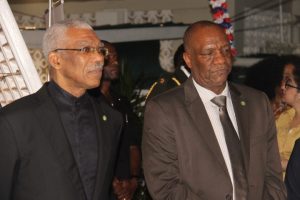 General Secretary of A Partnership for National Unity (APNU), Joseph Harmon has endorsed President David Granger for a second term, days after the party officially announced that Granger would be contesting the next general elections.

“It is with a deep sense of pride that I endorse David Arthur Granger to be the Coalition’s Presidential Candidate for a second term,” he said in a letter to the privately-owned Stabroek News newspaper on Thursday.

Harmon, whose widely believed presidential ambitions appeared to have been scuttled by his defeat for the chairmanship of the People’s National Congress Reform (PNCR) last August, hailed Granger as the right man for a second term because he is not corrupt.

“Guyanese we need a good captain who can steer the ship Guyana without malfeasance and corruption so that all of us can be beneficiaries of Good Governance and a developed country. Let us support the APNU+AFC Coalition,” said Harmon.

Corruption appears to be emerging as a big campaign issue moreso since the People’s Progressive Party elected Irfaan Ali to be its presidential candidate. Ali is facing the court for alleged fraud while he had been Minister of Housing and Water, and more recently concerns have been raised about the authenticity of his academic qualifications.

Last week, PNCR General Secretary Amna Ally categorically stated that her party’s leader and incumbent President is the right man for the job when elections are called. She used the opportunity to put down concerns in some quarters that he has not been delivering in an expected manner and that his affliction with non-Hodgkin’s Lymphoma, a type of blood cancer, would render him incapable of the rigours of an election campaign. “Despite the rumours and orchestrated approach to filter untruths whether they are on his health or competence, I on behalf of the PNCR would like to indicate that he is ‘fit and proppa’ for a second term and the PNCR endorses his candidature. We look forward to be under his guidance for a second term,” she said. 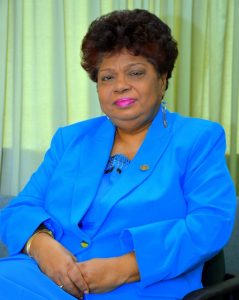 Harmon added that President Granger “has proven over the past three and a half years to be one with great vision, capability and has a right thinking mind.”

“We in the A Partnership for National Unity [APNU] are confident of his candidature as we have seen the appreciation of the Guyanese electorate for the work he has done over the years. His sober thinking, his advocacy for peace and development, his desire to see Guyana progress have all aided to enhance his beliefs of good governance,” said Harmon.

APNU is largely controlled by the PNCR which is the biggest party, the other parties being the Working People’s Alliance, the Justice For All Party, the Guyana Action Party and the National Front Alliance.

In recent weeks, the political future of Harmon and a number of parliamentarians across the political divide appeared to hang in the balance because they are also citizens of a number of other countries and constitutionally ought not to have been nominated as candidates or sit in the National Assembly.

The PNCR, the Alliance For Change and the People’s Progressive Party are preparing for general elections that should be held by the latest August 2020 but could be brought forward as a result of the passage of a no-confidence motion on December 21, 2018.

Much now depends on a High Court ruling on January 31, 2019 and possibly appeals to the Caribbean Court of Justice challenging the eligibility of Guyanese-Canadian, Charrandas Persaud to have been a candidate and subsequently selected to sit in the National Assembly. Persaud, a former government parliamentarian, had voted with the opposition to pass the motion 33-32. The court is also being asked to find that an absolute majority of the 65-seat House is 34 on the basis that half of 65 is 32.5 which is rounded up to 33 and then adding another seat.