Govt not finding Chinese company’s payment for shares in GTT 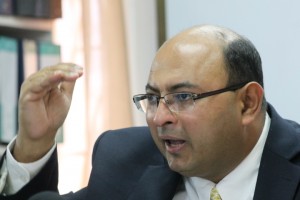 The almost one-year old coalition-led government says a recent trip to China for a US$5 million debt supposedly owed by a telecoms company for Guyana’s shares in the Guyana Telephone and Telegraph Company (GT&T) has turned up more questions than cash.

Brassington had said that Datang had paid US$25 million of the US$30 million for Guyana’s 20 percent stake in GTT and that legal and diplomatic options had been under consideration to retrieve the outstanding amount.

Contrary to claims late last year by then Head of the National Industrial Commercial and Investments Limited, Winston Brassington, Trotman said there was no trace of the funds. “What I can say is that Mr. Harmon has been able to retrieve some documents which tell a different story. That story being, of course, that the five million was paid so we are trying to track down to whom, how and where and when?… that is before May 16, 2015,”  Trotman said in clear reference to the date the APNU+AFC coalition took office following the elections five days earlier.

Trotman said the Minister of State has provided a full report and the NICIL Board was considering the findings before making them public shortly.

Brassington has said that US$15 to US$20 million have been spent on building a the Marriott-branded hotel in Kingston, Georgetown by Atlantic Hotels Inc; a wholly-owned government company.

The then NICIL boss defended the sale of the Guyana government’s 20 percent stake in GTT, saying that the share-offer was advertised more than 40 times locally and close to 30 times overseas and government had written all the embassies and consulates. In the end, he said the highest offer received was US$7 million. “We did consider the shares to be worth a lot more,” he said. “The best terms we could get was US$25 million upfront and US$5 million later. We had other options which had less money upfront and more money later and so the Board and the Cabinet accepted this. It was a good price, we believe,” he had said.