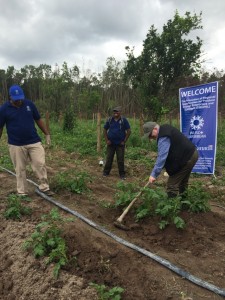 With the support of Canada, a research trial on several varieties of Irish potatoes to determine their suitability for local conditions is underway, the Canadian High Commission said Tuesday.

Thirteen ¼ acre Irish potatoes pilot plots are currently being supported through the $20 million Canada-funded Caribbean regional Promotion of Regional Opportunities for Produce through Enterprises and Linkages (PROPEL) project. “This undertaking is remarkable since it was previously thought that Irish potatoes could not be grown commercially in Guyana,” the mission said in a statement.

The trial began about a year ago when an initial assessment of the suitability of the Guyanese conditions for the cultivation of Irish potatoes was conducted through the PROPEL project.  With promising findings, the project also supported several capacity building initiatives, including cross-regional exchanges for select local producers and research scientists from the National Agriculture Research and Extension Institute (NAREI).

On Tuesday April 19, 2016, High Commissioner of Canada, Mr. Pierre Giroux visited one of the pilot plots in Laluni, Soesdyke, Region 4.  He highlighted the work of the PROPEL project as an important part of Canada’s contribution to agricultural diversification in Guyana and as a vehicle for sustainable economic growth.  Through the project, which is being implemented by the World University Science of Canada (WUSC), Canada is providing seeds and technical support to farmers to help create the most conducive conditions for the cultivation of Irish potatoes.  A key component of the sustainability of this initiative is the training and capacity building of NAREI extension officers who will in turn be able to provide support to farmers desirous of embarking on Irish potato cultivation.

The Canadian High Commission said a similar initiative under the Canada-funded project in Jamaica was remarkably successful, resulting in locally grown potatoes satisfying approximately 80% of the Jamaican demand.
“All indications are that similar or even better results can be expected in Guyana.  Already at the 4 week stage of the trial, yields are comparable to international standards.  The High Commissioner of Canada was particularly pleased that of all the varieties tested, the Canadian varieties of the Irish potatoes showed the most potential.”

The diplomatic mission said the project has already secured a local market for the first crop of Irish potatoes and is also working to ensure that all stakeholders from the producer to the consumer are involved in the trial.  Canada notes that the implications for economic diversification and increased employment in Guyana are significant.  Guyana consumes approximately 5,675 tonnes of potatoes per year, and being able to supply the majority of the local demand for Irish potatoes would augur well for farmers, the agricultural sector and the economy, according to the diplomatic mission.