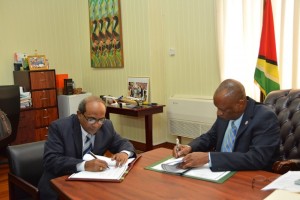 Indian High Commissioner to Guyana, Mr. Venkatachalam Mahalingam and Minister of State, Mr. Joseph Harmon signing the Memorandum of Understanding at the Ministry of the Presidency.

Guyana and India have inked a Memorandum of Understanding (MoU) for the establishment of a US$1 million Information Communication and Technology (ICT) Centre of Excellence in Guyana.

This Centre will provide training for public sector ICT professionals to ensure the availability of a highly skilled ICT workforce, equipped with the requisite expertise to meet the increasingly complex demands of the public and private sectors.

The MoU was signed at the Ministry of the Presidency in the presence of Mr. Floyd Levi, Head of the E-Government Unit, Ms. Vanessa Dickenson, Director, Department of International Cooperation, Ministry of Foreign Affairs and Mr. Malcolm Williams, Director of Policy and Training, E-Government Unit.

Minister Harmon noted that the MoU caters for the creation and operation of an ICT Centre of Excellence, which will be based at the National Data Management Building at the University of Guyana Complex. During the first two years of the project training of trainers will be completed, following which the facility will be handed over to the Government of Guyana.

“The parties will cooperate in the identification of required areas of training, the establishment of a centre for training in ICT with two class rooms of 25 students each, in the provision of academic material to train up to 500 students per year for two years, among others,” Minister Harmon was quoted as saying in a statement issued by the Ministry of the Presidency.

The Minister expressed thanks on behalf of the Government and people of Guyana, noting that the project will go a long way in the development of the human resources of the country. He noted that the prospects of such a centre are exciting.

“High Commissioner I want to thank you for this privilege. This has been an event that has been long in coming. It is a very significant moment in our history… The Government of India has persevered in ensuring that we have this Centre established in Guyana. I am very excited about the prospects that this project will bring and I am extremely pleased to sign this agreement,” Minister Harmon said.

Minister Harmon said that he expects that the Centre will be opened within the next three to six months. In the meantime, India’s High Commissioner to Guyana, Mr. Mahalingam, in brief comments, said that the Centre provides an opportunity for the development of the country and the people of Guyana, which his Government was pleased to facilitate.

“We have been waiting for this for a long time and finally it happened. This is only the first step. There are a lot of things that we need to do. We need to correspond with each other. We need to make the facilities available on your end… I am sure that this is going to be a real good opportunity for Guyanese to have training on various aspects of IT Management and we look forward to working together,” Mr. Mahalingam said.

The two countries had agreed to the establishment of the ICT Centre for Excellence under the previous People’s Progressive Party Civic (PPPC)-led administration.

Tagged with: Information Communication and Technology (ICT) Centre of Excellence