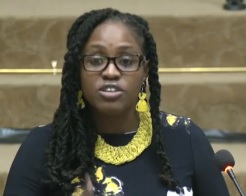 The Guyana government was Tuesday advised to strike a balance between the development of infrastructure and Guyanese.

Opposition A Partnership for National Unity+Alliance For Change (APNU+AFC) parliamentarian, Tabitha Sarabo-Halley asked what the Guyana government was doing to ensure that Guyanese, who need jobs, are in a position to be employed “before you actually bring persons from outside for those jobs.” In that regard, she suggested that it was “necessary” for the Ministry of Public Service and the Ministry of Labour  to work closely.

In response to Minister of Business Oneidge Walrond’s perspective on the spending of oil revenues, Ms Sarabo-Halley recommended that government find the right balance between infrastructural and human development to ensure that ordinary people benefit should world oil prices plummet. “What if the cost of oil drops now, no money has gone to the people. They are going to capital projects so the cost of oil drops now what then happens now?- Those contracts that you have started will have to stop half-way that you will use the oil moneys for and people would have received no0thing from the oil funds and so people would be left no economically different than they are currently,” she told the House.

Government parliamentarians have, however, cautioned against salary increases and higher cash handouts as those can fuel inflation and trigger a further increase in cost of living. The PPPC lawmakers have said cash grants have been putting more monies in the hands of ordinary Guyanese.