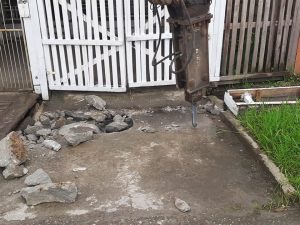 A bridge on Sandy Babb Street, Kitty being broken up. The owner said no notice was received.

Drainage relief works on the rugged and almost impassable Sandy Babb Street, Kitty, Georgetown accelerated on Friday with the breaking of several bridges across the thickly clogged gutters, but not without concerns that not all residents received notices from the government.

Police were summoned to one of the residents, who refused to move his vehicle from his bridge because no one in his household received a notice that his bridge would have been broken. Minister of Public Works Deodat Indar reportedly told the resident that he did not care about any action that was being contemplated and eventually called in the police. “I spoke to Minister Indar who told me that he has given permission for all bridges to be broken and that I can take my story wherever I want,” the residents said.  When contacted, Mr Indar conceded that he told the resident to call anyone he wished after the man allegedly claimed ownership of the drain and threatened to call his lawyers. He said he confirmed with the engineers that they had served notices to those residents whose bridges were earmarked for removal.

The resident said he had no idea when and how his bridge would be replaced and who would be paying.  But Mr Indar said after the gutters are cleansed, they would be built of concrete and residents could place metal sheets across to drive their vehicles in their yards. “They can’t go back and concrete it again because the same problem will happen again,” the minister added.

Several other residents said they received notices from the Public Works engineer that their bridges had been identified for destruction or sand for removal so that workers could remove thick silt and other obstructions such as old wood, zinc and concrete that were restricting the free flow of water underneath.

The Public Works Minister said after the water runs off freely to the engineers’ satisfaction, Sandy Babb Street would be repaired before the gutters are built of concrete. “The only way the road could fix is if the water comes off the road to drain out,” he said.

Residents, including the man who protested the destruction of his bridge without notice, did not object to the much-needed drainage works that officials said have contributed to the severe deterioration of a section of Sandy Babb Street. “I’m happy and most residents are relieved. It’s been awful. To get out to work;  the streets are flooded,” a woman told Demerara Waves Online News as she and her mother looked on at the works. She said she received a notice in writing for the sand on her bridge would be cleared sufficiently so that workers could access the gutter through a manhole.

Residents said the cleaning of the Sandy Babb Street drains was not enough and appealed to the Ministry of Public Works to clean the alleyway between Dowding Street and Sandy Babb Street. They said a nearby shop has been extended into the alleyway and that, in addition to vegetation and silt, causes the water to overflow into their backyards. 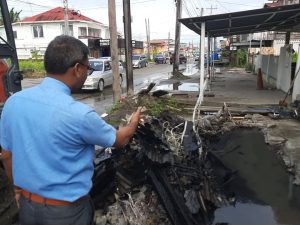 City Mayor Ubraj Narine looking at some of the debris that was extracted from the southern drain on Sandy Babb Street after a bridge was demolished.

City Mayor Ubraj Narine visited the area and though he said the City Council was not consulted about the works on Sandy Babb Street, he welcomed the destruction of the bridges in order to clean the gutters. “I’m in support of what is happening in Sandy Babb Street. This long overdue and this is where the City Engineer comes in for criticism where approval of works has been given to residents, they block the drainage system with concrete bridges and they cement the entire drainage system down,” he said.  Residents said government resorted to cleaning the drains mechanically after manual ‘bucket-and-spade’ efforts did not ease the flooding.

He said Central government did not consult with the City administration, “but these works are long overdue.”

During the uprooting of a number of bridges, obstacles that were extracted included old grill work, pipes, now rotten and corroded wood and zinc sheets and previously built bridges. “It’s a collapse of the building code down there,” the Public Works Minister said,

Sandy Babb Street is regarded as a key east-west corridor for vehicles entering and leaving Georgetown via Campbellville, Blygezight and Prashad Nagar.