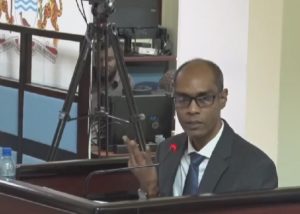 Opposition Guyana Elections Commissioner Vincent Alexander and the GECOM Chairman Retired Justice Claudette Singh were Friday in a bitter disagreement over the “secondment” of the Information Technology Manager Aneal Giddings as an ‘Operations Coordinator’ in the Operations Department for this year’s Local Government Elections (LGE).

Mr. Alexander, instead, maintained that the creation of the post of ‘Operations Coordinator’  and the  “appointment” of Mr Giddings violated the section of Guyana’s Constitution that states the mandate of the seven-member GECOM. “May I therefore reiterate what the article proffered. GECOM`s chair has no authority to create any position and make appointments to any such position, be it temporary or otherwise. The chairperson`s action was ultra-vires,” he said in a statement.

But GECOM, in a statement, denied that Justice Singh violated the Constitution if Mr Alexander’s reasoning is to be accepted. “The Chairman gave her approval for the secondment of Mr. Giddings with the full knowledge that she (i) was not creating any new position, (ii) was not making an appointment, and (iii) was aware that there is precedence of staff having been seconded, and in one case even appointed, without the knowledge and approval of the Commission,” the election management body said.

Mr Alexander also accused the GECOM Chairman of breaching her promise to put her ruling on the matter to a vote by that election management body when all the commissioners are present by announcing on Friday in a statement by GECOM that Mr Giddings has been seconded until the appointment of a Deputy Chief Elections Officer (DCEO). “No doubting can change the fact that Operations Coordinator is a temporary position created and filled by an act of the Chairperson. Admission of any such previous wrong doing, especially when it was identified, condemned, and the culpable officer reprimanded cannot be the justification for a subsequent wrong doing.,”  he said.

It was not immediately clear whether secondments can only be done by the Commission as the Constitution states that “The Elections Commission shall be responsible for the efficient functioning of the Secretariat of the Commission, which shall comprise the officers and employees of the Commission, and for the appointment of all staff to the offices thereof inclusive of all temporary staff, recruited for
the purposes of boundary demarcation, registration of persons and elections and shall have the power to remove and exercise disciplinary control over such staff.”

For its part, GECOM issued a statement explaining that Chief Election Officer Vishnu Persaud on November 9, 2022 asked the GECOM Chairman to approve Mr Giddings’ secondment to the Operations Department of  the GECOM Secretariat to assist with the day-to-day
implementation and evaluation of the statutory and administrative tasks delineated in the workplan for the conduct of LGEs.

GECOM said the Chairman’s approval of the requested secondment was based on the understanding that that would be a temporary arrangement until a suitable candidate is appointed to the position of DCEO.

The Commission said the filling of DCEO and other vacancies were placed numerous occasions on the agenda of statutory meeting of the Commission but that topic was “always” pushed back due to the need for the Commission to focus its attention on more pressing matters associated with preparations for the conduct of LGE. Needless to say, the filling of
vacancies is again in focus.

LGEs for the 70 neighbourhood councils and 10 towns have been pushed back from March, 2023 to later in the year to allow for the demarcation of boundaries and fixing of the voters lists.