Coop societies with idle lands will be dissolved- Labour Minister 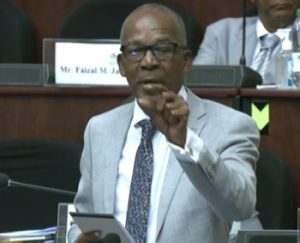 Minister of Labour Joseph Hamilton speaking i the National Assembl

Minister of Labour Joseph Hamilton on Monday announced that government was taking steps to dissolve cooperative societies that have not been cultivating lands for a long time.

“Those that want to work for development, we will work with them but what we will not continue to have happen- people utilising the farcical umbrella of coop societies when they have government land in their possession and I have no apology to make. The action, as I have said, is either they resolve these matters or they will be dissolved,” he told the National Assembly in his contribution to debate on the 2023 National Budget debate.

Mr Hamilton said he the Labour Ministry, which is responsible for the  regulation of cooperative societies,  has already asked the Lands and Surveys Commission, Guyana Forestry Commission and the Mahaica-Mahaicony Agricultural Development Authority (MMA) for information about State lands that are in the possession of those bodies. “Cooperative societies in this land of ours, they have in their possession tens of thousands of acres of land, most of it non-productive,” he said.

Mr Hamilton said in most instances, those societies are run by a family or one person who took it over and it is not productive.

The Labour Minister said his ministry’s Cooperatives Department has just concluded an “integrity audit so that we can understand the state of play.” No details were provided to the House about that findings of that audit.