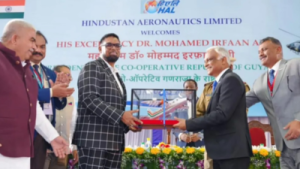 The cost of the new planes was not immediately available.

The top government official confirmed a report in the Times of India that President Irfaan Ali, while on a visit to India, has decided to but the two 18-seater twin-engine planes that are manufactured by Hindustan Aeronautics (HAL). India’s Minister of Micro, Small and Medium Enterprises, Rakes Sachan is quoted as saying that Dr Ali “has made a draft to process its purchase within a week.”

The Dornier 228 planes are reportedly being used by India’s Coast Guard to support maritime patrols but they can also be used for marine pollution contingency, search and rescue and medical evacuation.

United States-based Guyanese aviator, Miles Williams on Sunday warned that Guyana would have to exercise care in approving the Dornier 228 to fly here as Guyana could lose its almost 100 percent ICAO safety rating. “It becomes a problem when you start to put (certain types) aircraft, you kind of hurt your safety index if the aircraft is not approved,” he said. Guyana does not have a separate system that governs military aircraft and so all GDF planes must comply with civil aviation rules.

Outside of passing the necessary legislation for GDF aircraft to be registered under a regime that is separate from civil aviation, Captain Williams said Guyana could end up wasting money on buying two planes that could not be registered under Guyana’s nationality mark, 8R. He said if the planes are registered with Guyanese civilian aviation markings and there is an accident, that can have implications for Guyana’s safety index. He noted that neither the European Union Aviation Safety Agency nor the United States Federal Aviation Administration, which is a dominant  has approved the India-made D0rnier 228. Indian Directorate General of Civil Aviation granted a type certificate for the Dornier 228.

Mr Williams, however, praised the quality of the aircraft. “It’s a very good aircraft. It’s a good performer. It’s used extensively in places like Guyana, on rural airstrips.” In terms of Guyana remaining globally compliant, though, he recommended that Twin Otter or Casa-212 planes be bought.

A part from that regulatory reservation, the source said the Dornier 228 planes would be ideal Short Take-Off and Landing (STOL) aircraft for Guyana’s terrain and would be used for maritime patrols as well as, resupply of military bases, troop movement to interior locations. The government official said there would be sufficient spares for the Dornier 228 because “this is an aircraft that is in modern production.”

In June 2019, the Guyana government had purchased two used BN Islander planes for the GDF but one of them has been scrapped after it was deemed unserviceable. In March 2021, government acquired a brand new Bell helicopter for the army.