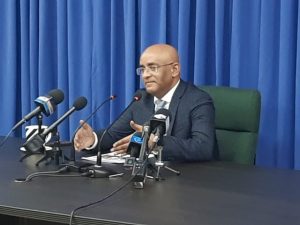 Vice President Bharrat Jagdeo has told the High Court that he did not defame the Chairman of the International Decade for People of African Descent Assembly- Guyana (IDPADA-G), Vincent Alexander while dealing with the financial management of that government-funded entity.

Through his lawyers C.V. Satram and Ron Motilall, Mr Jagdeo denies that the publications of 19th or 20th August, 2022 were defamatory, false or malicious as alleged or capable of any defamatory meaning whatsoever.

After Mr Jagdeo had refused Mr Alexander’s offer to settle the matter out court for GY$50 million, the IDPADA-G Chairman filed a GY$159 million lawsuit against the Vice President.

While maintaining that his utterances were not defamatory, Mr Jagdeo said he would contend that the words that Mr Alexander complains about “are substantially true.” He intends to argue that he exercised his right to fair comment and that he is entitled, as a public figure, to communicate his thoughts and views on the issue to the public who had a legitimate interest in receiving his views. “The words complained of were fair comments and an expression of honest opinions on matters of public importance and their publication was for the public benefit. The first named defendant was under a public duty to publish the said words to the general public who are entitled to receive such information. The said words complained of were published on an occasion of qualified privilege,” Mr Jagdeo said in the court papers.

In the court documents, Mr Jagdeo said IDPADA-G is a private company and at all material times Mr Alexander was of of its beneficial owners.

The Vice President states that IDPADA-G received GY$500 million from the government from 2018 to 2022, and he reserves the right to introduce evidence of further disbursements of public funds to that company. Mr Jagdeo said financial records show that that company disbursed GY$343,000 as grants “to ordinary Afro Guyanese who are intended to be the true beneficiaries of the funds”, and GY$42 million as salaries and allowances out of a total disbursement of GY$100 million in 2020.

According to Mr Jagdeo’s defence, he will would justify the use of the word “parasite” that the actions constituted “a drain on society.”

He said he had received numerous complaints from persons in the African Guyanese community and the intended beneficiaries of the money that they have been unable to access and have been excluded from any and all decision regarding the use and allocation.

According to Mr Jagdeo, he will contend that he is politically, legally and morally enjoined to speak out and condemn acts of illegalities, corruption, nepotism and cronyism and has a further duty to expose excesses, abuse of power, mismanagement, incompetence in public office, misuse of State resources and violations of the law and the Constitution.

Government has since withheld funds from IDPADA-G, the country’s privately-run coordinating mechanism for the United Nations Decade for African Descent, prompting legal action to compel government to disburse the funds.