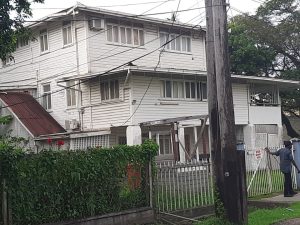 Police say they have recovered two of the several guns that were stolen from Radar Security Service.

Detectives from the Criminal Investigation Department Headquarters made a breakthrough in the case involving the theft of several Firearms belonging to Radar Security and Supplies Company which occurred on the 26th day of December 2022.

Five persons are currently in police custody including the mastermind who is a Security Official at the aforementioned company.

A few moments ago, one of the suspects took a team of investigators to a location in South Ruimveldt where two (2) of the stolen weapons were recovered.

The probe is ongoing, police said