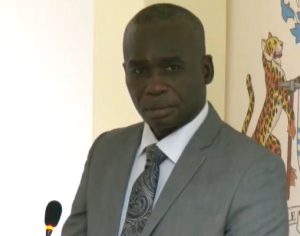 Former Police Commissioner Leslie James on Friday said he would not deny that specific instruction might have been given for results of the March 2020 general and elections from Statements of Poll be transmitted to the police high command.

Inquiry Commissioner Carl Singh queried about whether screenshots of Statements of Poll had been dispatched to a WhatsApp group of members of the Police High Command that had been established for the 2020 polls.  In response, Mr James said he did  not instruct anyone for screenshots to be sent via WhatsApp but said “election related information” was being transmitted by officers.

He explained that was to aid that law enforcement agency to prepare for any eventuality.

While Mr James said “I do not recall the specificity” of the information that was being shared via WhatsApp, he said it might have been included Statements of Poll after he was pressed by Mr Singh on whether that might have been so. “Sir, I don’t recall that specific aspect being given as an instruction” and when asked whether he would deny, Mr James added, “and I won’t deny.”

If that information was requested of the Commanders, Mr James said the reason was “security”. He could not recall specifically the five things- including the number 0f persons who had voted, the number yet to vote and the contents of Statements of Poll- that were required to be transmitted to Police Headquarters. “If I see an official police document, I would respond,” he said.

He confirmed, under questioning by the Attorney-at-Law for the Commission of Inquiry, who had been the members of that WhatsApp group that had  been established by the Communications Department of the Guyana Police Force.

Mr James admitted that prior to the advent of WhatsApp, police had collected the information manually from Statements of Poll from outside polling stations.

Mr James said instructions were given to establish a WhatsApp group to transmit information about “election related matters” on a timely basis, when Justice Singh suggested “results”. Mr James said he did not recall or would “not deny” that any specific directive for screenshots of Statements of Poll to be transmitted.  Asked if that was so, the reason would be for “security”.  Asked what were the “specific aspects” that were required to be transmitted, Mr James said if he were to see a police document, he would be able to respond.

Head of the Community Relations Department of the Guyana Police Force , Superintendent Crystal Robinson said the WhatsApp group was deleted after elections but she was unaware who did so.

On the issue of the state of affairs at the Region Four Returning Office at Ashmin’s Building, High and Hadfield Street, the former Police Commissioner said “I wasn’t concerned about the reason for the disorder”. Inquiry Commissioner Retired Justice Carl Singh asked Mr James whether an election official was declaring results that were contrary to law, he said “I don’t know.”

Mr Singh further asked if any election official was declaring results that were not on the Statements of Poll would require police action, Mr James preferred to answer that question, “My evidence is and my testimony is if any law is broken it will require police intervention at present or subsequently.”

He said while monitoring the television coverage of what was happening at the Returning Officer, he did see election-related illegalities but he did not take action at that time.

During planning for  election day, he acknowledged that the Guyana Elections Commission (GECOM) and the police did not want a large number of policemen inside the building to “overwhelm” the location. “I don’t recall the figure but the general understanding was that we will have a minimum amount of police ranks,” he said.

The former Police Commissioner said no one asked for more police to be deployed at the Returning Office.

Mr James said he was aware of a media report that Senior Superintendent Phillip Azore had allegedly assaulted then Elections Commissioner Robeson Benn. Pressed on what he had done, he said he had instructed that statements be obtained and that investigation be conducted. “I don’t recall whether it was done or not,” and he could not say whether the investigation was completed and if Mr Azore had been disciplined. He said he had deputised Deputy Police Commissioner Paul Williams to conduct the probe.

Earlier Friday, Mr Azore declined to testify before the Commission of Inquiry.