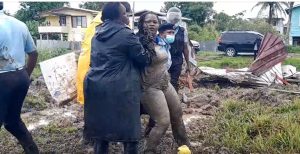 Police detain irate resident who protested the demolition of her house at Mocha.

Workers, backed up by armed police, were Thursday afternoon demolishing more houses at Mocha because government said the structures are on lands that are needed for drainage along a new East Bank Demerara road.

The houses were being broken down, even as Opposition Leader Aubrey Norton announced that his People’s National Congress Reform-led A Partnership for National Unity would be taking legal action. He said the lands are communally owned as they had been purchased by freed slaves in the late 1800s.

The opposition on Thursday appealed for dialogue with the government to find a solution that could include fair compensation and provision of alternative lands for farming and livestock. 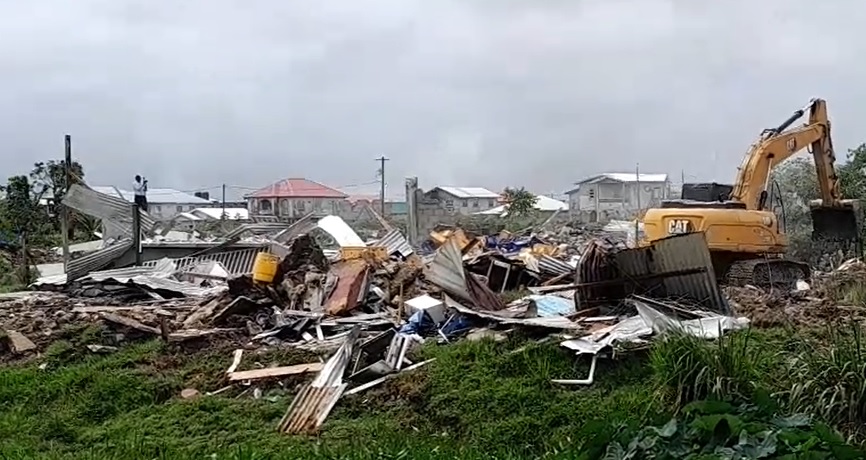 A dwelling and business place that was demolished by the excavator.

“Let’s get into a room; let us de-escalate this situation; let’s talk,” said opposition lawmaker Amanza Walton-Desir from Mocha.

She said the owner of a dwelling and business place was thrown into mud and arrested by police.

The Ministry of Housing and Water said except for seven households, the other persons have taken up government offers elsewhere and have moved out of the area. “We have said to all of these persons that removal has to be immediate and the removal is imminent. We have made the houses available for all of these remaining seven persons…This offer is still available. The ministry’s door is still open to engage. So, it is not too late,” Minister of Housing and Water Collin Croal was quoted by government’s Department of Public Information as saying.

Ms Walton-Desir said bridges were being “systematically” broken down by government workers to prevent the residents from accessing their houses at Caneview, Mocha.

Government said that in 2009, an occupational survey was done by Central Housing and Planning Authority (CH&PA) and that agency in 2021 engaged 35 families from Cane View on their relocation to prepare for the four-lane road.

The opposition has contended that the removal of the residents is racially motivated as they are Afro-Guyanese , but the Housing Minister said the lands are reserve and are for possible expansion, drainage network, ingress, and egress.

Extensive consultations were done to ensure the residents were relocated to developed housing schemes at Farm and Herstelling on the East Bank, equipped with all the amenities that will lead to their enhanced livelihoods. Some of the residents have been resettled in a more cohesive, sustainable and safe community, government said.

The compensation process and agreements were signed in December 2021 and their existing properties were valued at the current market price by the finance ministry’s valuation division.

To date, some $250 million has been spent as compensation to 27 persons along with over $6 million compensation for crops.

Lands, assistance and titles were made available to the residents free of cost, government said.