PNCR members refuse to testify before Elections Commission of Inquiry 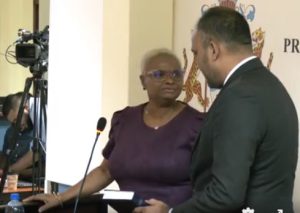 While Dr Cummings was unrepresented and chose to “remain silent”, Ms Lawrence an Ms Smith-Joseph were represented by Attorney-at-Law Nigel Hughes.

He told the three-member Commission that his clients have “pending criminal proceedings related to offences related to the conduct of the elections and consequently I think they face some jeopardy if they were to testify” and so he has advised them not to put themselves in a position of self-incrimination in keeping with Guyana’s constitution and “consequently won’t testify.” 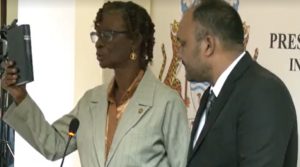 Ms. Carol Smith-Joseph takes the oath in the presence of Secretary to the Commission of Inquiry, Attorney-at-Law Javed Shadick.

When Ms Lawrence entered the witness box and was given the Holy Bible to take the oath to speak the truth, she asked the Secretary to the Commission  Javed Shadick “what ah swearin  fuh?” and after a few seconds of quietude she abided by the procedure. When asked to state her full name and address, she in turn asked the Chairman “who is addressing me” before she responded. She then stated that she wished to “reserve my right to remain silent.”

Ms Lawrence, Ms Smith-Joseph and then Region F0ur Returning Officer Clairmont Mingo have been  charged with fraud in relation to the March 2020 general and regional elections.