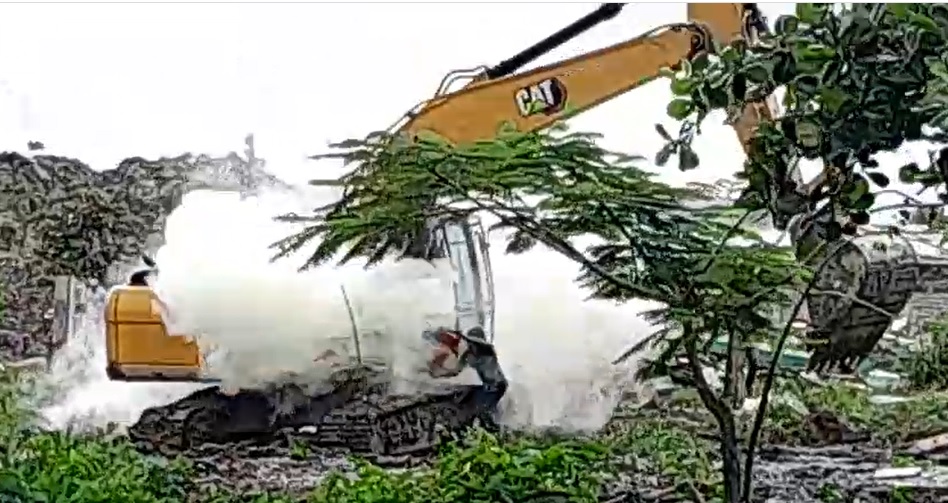 The excavator that was used to demolish several houses on a government reserve at Mocha, East Bank Demerara was set alight Thursday afternoon but the blaze was quickly extinguished.

Police also fired teargas at a group of persons to chase them away from the area. However, persons present said the canisters were “cold” as most of them did not fully discharge.

Among those witnessing the crushing of the more than seven wooden and concrete structures were Opposition Leader Aubrey Norton and opposition parliamentarians Coretta Mc Donald, Amanza Walton-Desir and Nima Flue-Bess.

Bridges across a canal were demolished even as occupants were moving furniture, appliances and other valuables from their properties.

At least one woman was arrested earlier Thursday afternoon after she resisted the demolition of her dwelling and shop.

A Guyana Police Force Public Order Unit consisting of lawmen, with shields, batons and firearms, protected the excavator during the operation from being encircled by aggrieved residents.

The People’s National Congress Reform-led opposition earlier Thursday said it was planning to file legal action on the basis that the lands are owned by descendants of freed slaves who had collectively purchased them in the late 1800s. Asked why only now efforts were being made to  move to the High Court although the issue is month-old, Mr Norton said evidence was first being collected.

The Ministry of Housing and Water has said that most of the residents, who were on the reserve for the Eccles to Great Diamond Road, acted various types of compensation including land and houses in exchange for their removal from the area.

However, the opposition maintained that the residents were being targeted by the government because they are Afro-Guyanese. The governing People’s Progressive Party traditionally draws the bulk of its political support from Indo0-Guyanese.

After vowing to resist the removal of the residents from that area, the opposition on Wednesday called for dialogue with the government to reach an amicable settlement.