Will Hicken’s tenure as Police Commissioner be extended? 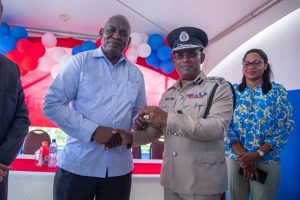 Acting Police Commissioner Clifton Hicken’s tenure looks set to be extended beyond the retirement age of 55 based on the performance of the force, Home Affairs Minister Robeson Benn said Wednesday.

While Mr Benn opted not to speak directly to Mr Hicken successor, he signaled very strongly that the Guyana government was satisfied with the Guyana Police Force’s performance and would prefer to continue with leadership of that law enforcement agency that has been tested and proven. “I think he is performing quite well,” he said. When asked whether Mr Hicken’s contract would be extended, Mr Benn said, “all things are possible.”

The Home Affairs Minister highlighted that in 2022 for the first time, serious crimes have plummeted by 19 percent. “We have had year-on-year almost 20 percent reduction serious crimes in Guyana; 20 percent reduction and those are dramatic moves, positive moves in respect of crime fighting in the country in spite of all the other difficulties we have had so I am sure we would want to go with what is good, that and who is performing,” he said.

Then Police Commissioner Laurie Lewis had been appointed to that post in 1990 and after he had attained the age of 55 in 1997, the then People’s Progressive Party Civic-led administration had extended his tenure until 2000. He was succeeded by Floyd Mc Donald.