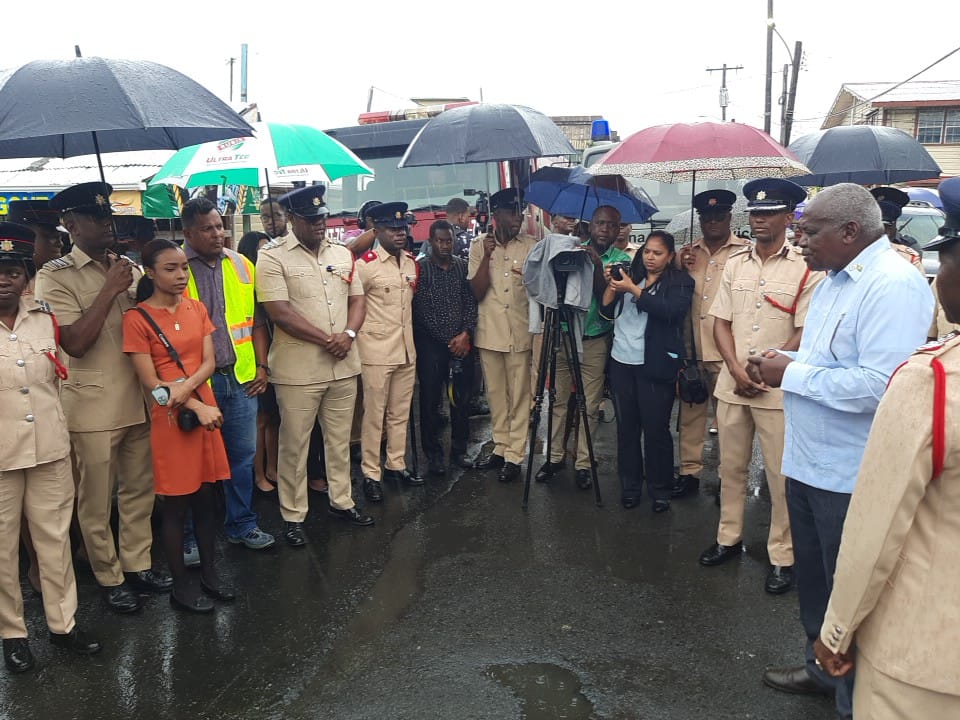 Mr Benn arrived during the downpour for the official handover of excavators, a tractor and a trailer to the Fire Service to assist them in the movement of debris during fires and the construction and maintenance of fire hydrants.

He declined to be sheltered with an umbrella and instead opted to brave the showers but to his dismay, the Fire Officers and firefighters scurried in the building to avoid being wet. Seconds after, Chief Fire Officer Gregory Wickham summoned all of them to return in the open and then the Home Affairs Minister chided them for demonstrating poor leadership by escaping the showers. “That’s the problem with the Fire Service. Officers don’t have a command presence and could not show the requisite example to the people under them,” Mr Benn said.

The Minister said he has already instructed the Chief Fire Officer to take disciplinary action against commanding officers who do not require their subordinates to be present and fight fires. Mr Benn said officers’ uniforms would be changed. “Since you all going to run out of the rain, I will change the uniforms you wear; it’s looking like is too much office uniform. We will change the type of uniform that you usually wear,” he said.

He expressed grave concern about the inclination of fire officers to retreat from fires and other emergencies and cautioned that there would be “no use for you”. He appealed to firefighters to change their posture from one of allowing buildings to burn to instead fighting fires and rescuing persons. Mr Benn noted that government was buying assets and so it was the duty of firefighters to use gears such as gloves, boots, goggles and breathing apparatuses. “You must wear the expensive equipment that we have bought to fight the fires,” he said. Mr Benn said there would be no tolerance of fire fighters who fail to provide better service or they would face disciplinary action.

The Home Affairs Minister said government was prepared to pay off Guyana Fire Service personnel if they would not be abiding by the new posture that he has  requested of the Chief Fire Officer. “Who don’t like it could leave the service. We will pay you all off,” he said. He advised fire fighters not to bring the culture of the streets into the Fire Service.

A fire officer, who walked passed the media during the rain, remarked that he would be taking three days off from work. 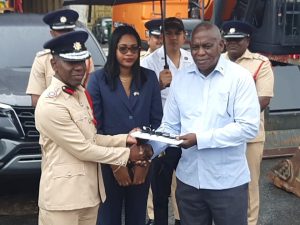 Minister of Home Affairs Robeson Benn hands over the keys for the excavators and other vehicles to Chief Fire Officer Gregory Wickham.

The Home Affairs Minister said the GY$81.8 million worth of equipment included wheel excavators that would be used to clear debris to advance into flames “to be in a better position where you could out fires” because “creating access” was a problem in recent fires. He said the first priority for such equipment are central areas along the banks and the coast of Region Four ‘A’ where there are many bonds. “Eventually. we’ll get to the other places,” he said. The equipment includes two excavators, one motorcycle, one Sport Utility Vehicle and three double cab pickups.

Meanwhile, hours later firefighters responded to a fire at Christ Church Secondary School, Camp and Middle Streets. The fire was contained to the Science Laboratory, the fire service said.

Mr Benn, Prime Minister Mark Phillips, the Chief Fire Officer and several other persons were at the scene of the fire. The Ministry of Education on Wednesday evening announced that there would be no classes at Christ Church Secondary School on Thursday and Friday.

2023-01-04
Denis Chabrol
Previous: Chief Fire Officer says to remain on job after retirement age
Next: Former Police Commissioner James did not enquire about security of “alone and afraid” GECOM Chairman; “unaware” of many things