Former Police Commissioner James did not enquire about security of “alone and afraid” GECOM Chairman; “unaware” of many things 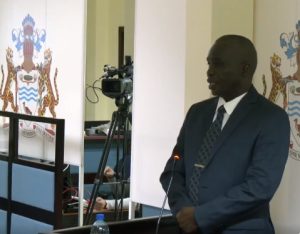 Former Police Commissioner Leslie James testifying before the Commission of Inquiry into the March 2020 general and regional elections.

Former Police Commissioner Leslie James on Wednesday said he never ordered that the Region Four Returning Office (Ashmin’s Building) for the 2020 general and regional elections be cleared and he did not enquire about the security of the Chairman of the Guyana Elections Commission (GECOM), Retired Justice Claudette Singh.

He told the Commission of Inquiry that instead, he had asked that the Returning Office on Hadfield and High Streets, Georgetown be secured on March 5, 2020 based on information he had received from, among, others, the Justice Singh.

Mr James confirmed that he had instructed the then Head of the Tactical Services Unit (TSU) to secure the building because there was a breakdown of law and order, potential damage to property and injury to persons, but he had subsequently seen video of the building being cleared after that had been done.

While admitting that his instruction was violated, he did not take any action. “There was no need for me to do anything at that point in time.”

He said “I’m unaware” that Deputy Chief Elections Officer Roxanne Myers wanted the building to be vacated on March 5, 2020, and “to the best of my recollection” he did not know that Ms Myers reported to Deputy Police Commissioner (Operations) Maxine Graham that Mr Thomas was not complying with her instructions to have the building vacated.

While stating, under examination by a lawyer for the Commission of Inquiry, that “I had never received a call from anybody at GECOM” or any GECOM Commissioner but shortly after he said he had spoken with the GECOM Chairman. “It was as a result of footage that was being shown on several national television stations. It was as a result of information that was being fed to me and also as a result of a conversation that I had via telephone with the then GECOM Chair,” he said. “Based on what I was seeing and the reports I was getting, there was a breakdown of good order,” he added. Acts, he said, included the verbal and physical abuse of police and attempts by at least 30 persons to storm the office of the GECOM Chairman at the Region Four Returning Office. He said Ms  Graham was receiving reports from GECOM and also in contact with then Divisional Commander, Assistant Police Commissioner Edgar Thomas.

He recalled speaking with Justice Singh after viewing footage and making efforts to contact Thomas “because what I was seeing was clearly disorder in my view” and “mayhem which was contrary to what was expected to be happening at that location.” Mr James said the GECOM Chairman did not request Tactical Service Unit personnel to go to the building.  Mr James said none of the international observers had made any statements about mayhem but about the questionable declaration of results.

Mr James said none of the Special Branch officers, who were detailed to Justice Singh, called him. Eventually when Justice Singh answered and informed him that she was afraid and alone, but he said he did not ask her about the whereabouts of her security. He also said “it wasn’t necessary” for him to enquire about her security from the then Head of the Special Branch Deputy Commissioner Nigel Hoppie. Mr James said he expected the security systems “on the ground.” Eventually, he said, he instructed Mr Azore to escort the GECOM Chairman out of the building in the afternoon of March 5, 2020.

The former Police Commissioner indicated that he made several failed attempts to reach Mr Thomas by phone and radio “as a result of that I took other action.”

He admitted that in a general sense the deployment of the TSU at about 6 PM on March 5, 2020 that day had nothing to do with the need to provide security to the GECOM Chairman. Instead, he said, it was done to secure the building, persons and property.

On November 4, 2022, Mr Thomas had testified receiving several telephone calls from Mr James but the latter said on Wednesday that “Mr Thomas was not contactable. It is untrue for him to say that.” Mr James also denied instructing Mr Thomas to have the persons vacate the Returning Office. Further, he said Mr Thomas’ claim that he had received a telephone call from him and that he had brought him up to date on what had been happening at the Returning Office was also untrue.  Also debunked by Mr James as untrue was Mr Thomas; testimony that there had been a problem with the Statements of Poll and that he (Mr James) was forcing the point that people, except the Special Branch ranks, leave the building.

He said Force Control is expected to monitor and log communication from the Police Commissioner and there should be such a record.

Mr James said Mr Thomas was stood down based on his conduct and Superintendent Phillip Azore being stood up as Divisional Commander. He restated several times that he could not have informed Mr Thomas of the change of command because he could not have been reached by phone or radio. Days after, Mr James said Mr Thomas was summoned to his office and an enquiry into the reason for his conduct, along with the four Deputy Police Commissioners. “As the Commander for the Division, he was not contacted, he abandoned his Division, he abandoned all of his ranks and naturally, as Commissioner, I sought to hear from him,” he said.  Mr James explained that he needed to conduct an enquiry for the purpose of the Police Service Commission.

After relieving Mr Thomas of his command for Region Four, he remembered seeing calls coming in from him and “I declined to take his call.” He said he was unaware that Deputy Commissioner Graham had said that Mr Thomas had called her saying that he was leaving the post.

The former Police Commissioner said from what he had seen there might have been armed persons at the Region Four Returning Office, a part from police. However, he said he had been unable to contact Mr Thomas to give him specific instructions in that regard.  Asked whether he had told Mr Azore to do so, Mr James said, “I never said that to Azore” or his deputies, he said “I didn’t” and “it wasn’t necessary” to inform GECOM.

Shortly after, the former P0lice Commissioner said he might have informed Azore about the presence of possibly armed persons at the Returning Office. “I do not recall whether it was done but I do think in my prudence, I may have said that to him,” he said.

Mr James said all police records about that period ought to be available because “it was a professional police that I was in charge of.”

Mr James said he never had any direct or indirect contact or relationship with the then Deputy Chief Elections Officer Roxanne Myers. He said he was unaware that a police officer had been shown an object in what appeared to have been lens with a camera that might have been a bomb at the Returning Office. “Unaware? And you were concerned about security?,” queried Inquiry Commissioner Retired Justice Carl Singh. He said “I think there might have been arrest” of a man in connection with the alleged bomb threat, but was unaware of the status of that matter and did not make any enquiries.