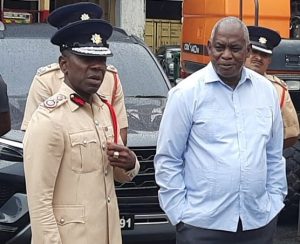 Sources said Mr Wickham should have proceeded on preretirement leave on September 6, 2022 but up to January 4, 2023 he was very much on the job. But Mr Wickham said he has not received an extension and that he would attain retirement age “maybe some time next year.”

Home Affairs Minister Robeson Benn opted not to precisely address the issue of succession at the Guyana Fire Service. on Wednesday when he was asked for his perspective. “I’m not discussing succession plans. Improvements have to be made and I spoke to those just now,” he said, adding that who would take over would depend on a review.

Sources said Mr Wickham is actually a Divisional Fire Officer who is acting as Chief Fire Officer since January 2022 when then substantive Fire Chief Kalamadeen Edoo was sent off the job.

Mr Wickham, however, said his substantive position is Chief Fire Officer (acting) and that it would eventually be Chief Fire Officer “because there is no other Chief.” “It’s waiting on approval” by the Public Service Commission, he added.

Sources, however, say that if Mr Wickham is to remain on the job beyond retirement, he would have to be re-employed on contract but that would result in several officers not being promoted. “He will be holding up promotions for others,” the source said.

According to the sources, already a number of Guyana Fire Service officers are already disgruntled that they would not be promoted if Mr Wickham remains on the job beyond retirement age.