St Vincent and the Grenadines PM on official visit to Guyana; agenda undisclosed 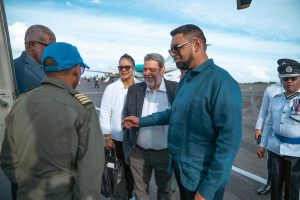 Prime Minister of St Vincent and the Grenadines Prime Minister Ralph Gonsalves arrived in Guyana on Monday  but no details were provided about this previously unann0unced four-day “official visit”.

Enquiries about whether memoranda of understanding or agreements would be signed and what would be on the agenda proved futile.

Clearly all protocol and other arrangements were in place for the arrival of  the Vincentian leftist leader who enjoys close relations with other historically working class oriented parties in Venezuela and the Caribbean.

St Vincent is responsible for maritime and air transport in the Caribbean Community’s (CARICOM) quasi-cabinet.