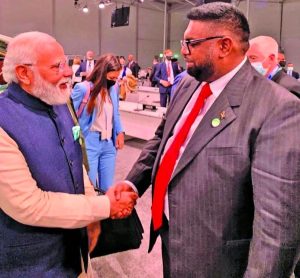 He was selected from among a list of 27 nominees for this year. The 17th PBSA will be conferred by the Honourable President of India as part of the upcoming Pravasi Bharatiya Divas (PBD) Convention (Indian Diaspora Day)  to be held in Indore, Madhya Pradesh, from 8-10 January 2023.
“President Ali joins 26 other persons of Indian origin / non-resident Indians who have been recognized by the Government of India for their outstanding achievements both in India and abroad.,” the High Commission in Georgetown said.
The Award will be conferred during the valedictory session  of the Convention on 10 January 2023. President Ali has been invited as the Chief Guest for the upcoming PBD Convention and will be travelling to India with a high level delegation comprising of both official and private sector representatives, the High Commission said.
High Commissioner of India to Guyana Dr. K J Srinivasa has officially congratulated H.E. Dr. Mohamed Irfaan Ali on being the recipient of the prestigious Pravasi Bharatiya Samman Award calling it a recognition of the outstanding contributions of President Ali to Guyana and his efforts to bring about the rapid and equitable development of Guyana.High Commissioner also expressed hope that the upcoming visit of President Ali to India for the PBD 2023 and subsequent interactions with the top political hierarchy  including H.E. President of India  Smt. Droupadi Murmu, Prime Minister of India Shri Narendra Modi,  External Affairs Minister of India Dr. S. Jaishankar and other dignitaries along with high level interactions with the business/private sector of India especially pertaining to Agriculture, Agro-processing, Health, Pharmaceuticals, Infrastructure, Information Technology and Energy sectors  will provide the necessary impetus for further strengthening bilateral partnership between India and Guyana. In his New Year’s message for 2023, High Commissioner Dr. K J Srinivasa had  called upon  the Guyanese to work for the growth and success of Guyana and to play an active role in fulfilling “Guyana’s unique destiny”.

A Jury-cum-Awards Committee, with Vice-President of India as the Chairman, External Affairs Minister of India as the Vice-Chair and other distinguished members from various walks of life considered the nominations for the Pravasi Bharatiya Samman Awards, 2023 and unanimously selected the awardees. The awardees represent the excellence achieved by the Indian  Diaspora in various fields.

Following is the list of Awardees recommended by Jury-cum-Awards Committee for conferment of the Pravasi Bharatiya Samman Award 2023: