Standoff between Mocha villagers, police and housing officials over demolition of houses 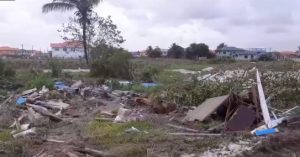 Villagers of Mocha, East Bank Demerara faced off with police and government workers who were demolishing houses that the Ministry of Housing said needed to long move because they are near an alternative East Bank Demerara Road aback the village.

A number of residents, mainly women,  laid across the road to prevent workers from breaking down more structures.  Government said  the residents are in the way of the Eccles to Great Diamond Highway,

Opposition Leader Aubrey Norton , opposition parliamentarians Coretta Mc Donald, Nima Flue-Bess, Natasha Singh-Lewis and Ganesh Mahipaul were on the scene to lend support to the aggrieved residents. Mr Norton reiterated that the action against the residents was racially motivated against the mainly Afro-Guyanese residents. Mr Norton challenged President Irfaan Ali to return to Mocha and “explain to the people why they are not in the path of the road but they have to move.”

Ms Flue-Bess urged government to negotiate a proper resettlement with the affected residents . “The road is not passing there. Why you can’t negotiate properly with the people,” she said. Ms Singh-Lewis accused the police of ordering the destruction of a bridge. The Ministry of Housing and Water up to late last year offered “move-in ready single flat two-bedroom housing units” to several families. A number of the residents had been demanding proper compensation for the loss of lands that they usually plant crops and rear poultry and livestock.

Ms Flue-Bess sought to dispel any claims that the residents were squatters. “This is not squatting. It is ancestral lands,” she said, suggesting that many of the persons were residing there for 30 years.

City Mayor Ubraj Narine questioned why the residents of Mocha could not be offered title for the land in the same way that the residents of Pigeon Island, East Coast Demerara were recently granted titles to the lands that they have been residing on for decades. “They can lock me up again. I don’t care. I am fearless at this point in time,” he said.

A source said the residents are expected to keep watch overnight in an effort to prevent the further destruction of houses.

2023-01-03
Denis Chabrol
Previous: St Vincent and the Grenadines PM on official visit to Guyana; agenda undisclosed
Next: Ex PNCR Treasurer denies he is a PPP agent