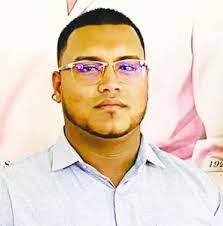 The former Treasurer of the People’s National Congress Reform (PNCR), Faaiz Mursaline on Sunday confirmed that he formally complained to colleague members of the Central Executive Committee about alleged lack of accountability and racial discrimination by a well-known figure in the party.

But Mr  Norton on Sunday said he “I haven’t looked” at Mr Mursaline’s correspondence. The PNCR Leader denied receiving complaints from Mr Mursaline about alleged racial hostility by a well-known party member. “No he has never,” Mr Norton said.

About Mr Mursaline’s claim that ever since he took over as Treasurer of that party in December 2021 that “I was signing blank cheques with no supporting documents,”  Mr Norton said, “I don’t know anything about that. I have not engaged on these issues. I will deal with all the party matters inside the party.”

Mr Mursaline said a work plan had been submitted to the leader outlining how the PNCR could garner funds but “to date there has been no communication or deliberation on that plan. However, the PNCR Leader said he did not know what the former Treasurer was talking about, as “I have seen no document from him, I have had no discussion with him on the workplan.”

He further alleged that PNCR Leader Aubrey Norton had done nothing to address his concerns although they had been raised with him.

When contacted, Mr Mursaline confirmed that he dispatched the correspondence to other Central Executive Committee members and said, “it is individuals who are making the PNC look bad; it is not that the PNC is bad so this statement that I make here is not about the PNC generally but it’s individuals in the PNC.”

He also told Demerara Waves Online News that “the PNC is not a racist party; it’s the individual again in the party.”

In Mr Mursaline’s statement that was dispatched to his fellow Central Executive Committee members on December 31, 2022, he said he opted to explain why he resigned from the post of Treasurer in December 2022. “I’ve come to the conclusion, for my own integrity and the well-being of our party that it is necessary for me to bring to the attention of the CEC reasons for my resignation.”

He said whenever he raised concerns about the signing of blank cheques , he was “met with hostility.” The other signatories were then General Secretary Geeta Chandan-Edmond, who was on leave from either late August or early September 2022, and the PNCR’s Leader.

Mr. Mursaline said during November 2022, said “it got worst” with him signing “about 20 blank cheques.” “I do not know what are the amounts of money written on any of those cheques and I don’t know for what reasons the money, if any were spent on,” he said.

According t0 the document seen by Demerara Waves Online News, Mr Mursaline claimed that “to date nothing has been done” about his recommendation to Mr Norton that the PNCR’s finances be audited “for our own benefit and for us to ensure proper accountability and transparency. “I even suggested that because Cde. Volda Lawrence has the skills in that area we use her to be our guidance. The intention was solely to do what is right for our party and to build trust among our membership. The Leader told me that is a conflict of interest and that he will take care of it,” Mr Mursaline said.

“My friends I am sorry to drop all of this but the pressure was just too much. I continue to love the PNCR with all my heart but I cannot continue to serve under the current circumstance. My apologies to all,” he said.

In recent months, the PNCR has been hit by Annette Ferguson’s allegations of irregularities at the PNCR’s last internal elections in December, 2021.

Mr  Mursalene remains an executive member of the PNCR.