President Ali flown by charter to Brazil for Lula’s inauguration 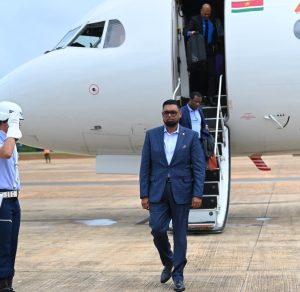 President Irfaan Ali and Foreign Affairs Minister Hugh Todd (in the background) arrive in Brazil aboard a Fly Allways aircraft.

President Irfaan Ali arrived in Brazil’s capital, Brasilia, aboard a flight chartered from the Surinamese airline, Fly Allways, even as the Guyana Defence Force (GDF) is making efforts to make a seized illegal plane operable.

Several decades ago, the loss-making then state-owned Guyana Airways Corporation (GAC) closed its doors and since then the country is without its own airline.

If Presidents Ali and Santokhi had taken a scheduled flight to Brazil, they might have had to depart their countries two days before and go via Panama or the United States.

It is unclear whether a Beechcraft seized by Guyanese authorities in 2017 in the Rupununi would eventually be used by the President and other government officials to fly directly to overseas destinations on official business. 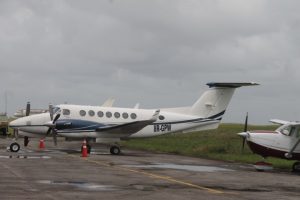 GDF Chief-of-Staff Brigadier Godfrey Bess on Sunday said the twin-engine Beechcraft would be “operational within the first half of this year.” Asked if it would be used for military, commercial and VIP flights, he said, it “will be used in various roles considering Guyana security landscape and its developing state. It will be a national asset.”

Guyana, Brazil and Suriname have been holding talks about joint cooperation in natural gas as part of the Arco Norte gas-fired electricity project as well as cooperation in other aspects of hydrocarbon exploration and production.

Guyana, which is already linked with Brazil via the Takatu Bridge, is hoping to complete the Linden-Lethem road and the construction of a deep water port to allow Brazilian goods to the Caribbean and international markets through the cheaper Atlantic route through Guyana.