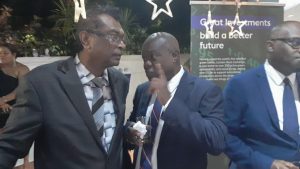 Leader of the Alliance For Change, Khemraj Ramjattan and Opposition Leader Aubrey Norton. At right is Shadow Attorney General and Minister of Legal Affairs, Roysdale Forde.

The Alliance For Change (AFC) has formally broken away from its coalition with A Partnership for National Unity (APNU) but they would work closely together in the National Assembly, AFC Leader Khemraj Ramjattan said Saturday night.

The revised Cummingsburg Accord, a political agreement between the two organisations, provide for the two to go their separate ways three or five years and so the AFC’s National Conference decided to exit on December 31, 2022 . He said the two political organisations would do their political work separately but work in parliament jointly. “We will consult and collaborate at the parliamentary level. We are a partnership that’s called APNU-AFC and we certainly would want to collaborate,” he told Demerara Waves Online News.

Mr Ramjattan on Wednesday met with APNU Chairman, Aubrey Norton, who is also the Leader of the People’s National Congress Reform (PNCR), and informed him that his party was formally walking away from the coalition in keeping with its internal decision. “Not in writing; I went to meet him,” Mr Ramjattan told Demerara Waves Online News, adding that it was a “cordial engagement.” “I thrashed out the issues as to our withdrawal,” he added.

But in his New Year’s address, Opposition Leader Norton indicated that APNU and AFC would be contesting the 2025 general and regional elections. “In this era of hopelessness what Guyana needs is a government with a vision, a plan and one that cares for the people of Guyana. This is what the next APNU+AFC government offers the people of Guyana in 2025 or whenever elections are called,” Mr Norton said.

The AFC Leader said his party’s nine parliamentarians could not be recalled from the National Assembly because the electoral alliance was no more. He said AFC and APNU contested the elections jointly so their parliamentary representation is in keeping with Guyana’s constitution. “There is an inviolability of the nine seats that we have because we were APNU- AFC…Some people feel that all nine seats are going to go. That is utter rubbish,” he said.

Asked if that was raised in the meeting, Mr Ramjattan said “everything was raised” and was addressed in an amicable and cordial manner. “We are happy and APNU is happy. We remain a parliamentary party as APNU+AFC and we move forward,” he said.

The PNCR-led APNU has 22 seats.

Over the years, the AFC had complained privately and openly about APNU sidelining its smaller coalition partner for Local Government Elections, breaking of agreements for AFC members to be Vice Chairs of Region Four (Demerara-Mahaica) and Region Ten (Upper Demerara-Upper Berbice).