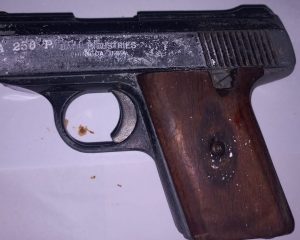 RECOVERED: The gun that the schoolboy allegedly stole from his uncle

Two 16-year old schoolboys were early Tuesday morning arrested after one of them allegedly stole his uncle’s handgun and gave it to his friend who lives at Beterverwagting, East Coast Demerara.

The Guyana Police Force said a licensed firearm holder of Aubrey Barker Road, South Ruimveldt reported at about 10 AM Christmas Day at the Ruimveldt Police Station that he suspected that his 16-year old nephew, a student at a secondary school on the East Coast Demerara, stole his .32 brown and black pistol along with six matching rounds from his home.

After the man’s nephew was arrested and he confessed to stealing the firearm and giving the other teenager to hide,  police said they conducted an operation at 1 AM in Beterverwagting where his friend handed over the gun.

“The ranks went to the home of the 16-year-old student at Beterverwagting where he was contacted in the presence of his mother. He was questioned about the firearm ad he admitted to receiving it from the man’s nephew.

He then took the Police to the back of his house and pointed out a spot where he hid the firearm and six matching rounds of ammunition. Both teenagers are in custody as investigations continue,” police said.

The name of the owner of the firearm, though provided by the Guyana Police Force, has been withheld as it can lead to the identification of the boy.

In relation to the other four firearms and ammunition that were taken off the streets early Tuesday morning, at about 2:50 AM, police said a 26-year old man, who is a miner, escaped briefly as they were about to search him in the vicinity of Melanie, East Coast Demerara. However, according to police, he was caught but not before pelting a .32 Taurus revolver with four live rounds under a nearby motorcar.

A handgun, which was allegedly tossed away on a parapet at Melanie Market Road after police said they  attempted to arrest a gold miner, who is from 31 years old and from Nabaclis, East Coast Demerara. He was subsequently apprehended.