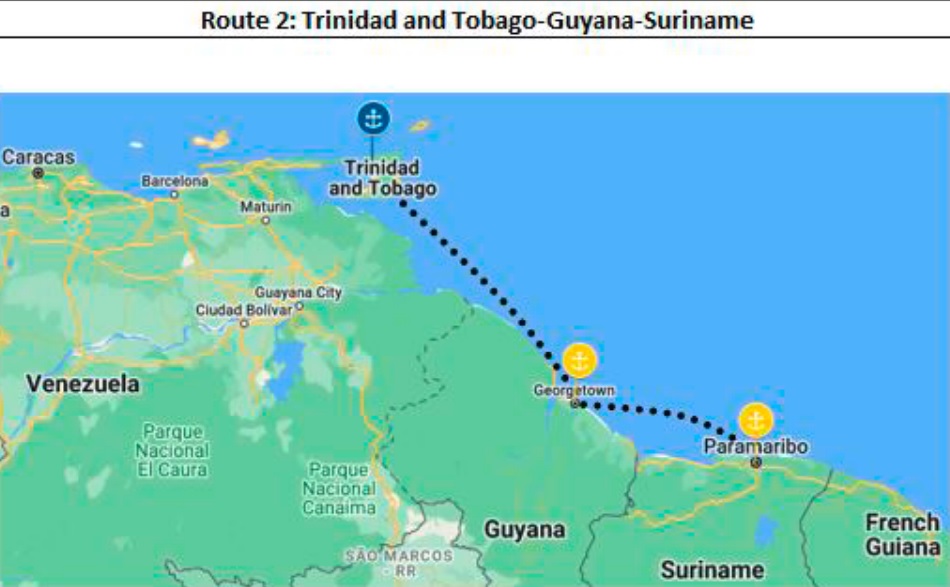 Guyana has been identified as one of several Caribbean countries that could be part of a regional ferry network which is expected to be cheaper than airfares if slower vessels are used, and the proposed Public-Private Partnership model would have to include the upgrading of wharves, according to a study done for the United Nations Economic Commission for Latin America (ECLA).

According to the proposal that was prepared by Associate Economic Affairs Officer of ECLAC’s Infrastructure Services Unit in the International Trade and Integration Division, Diogo Aita, Guyana is named in route 2 which includes Trinidad and Tobago, and Suriname. He says this route is expected to be the most viable among the four that have been identified.

“Route 2 leaves the best profit margins for the service. According to the main study, for a frequency of two departures per week, it would need one vessel both in the case of a passenger ferry option (Mexico V) or for the two options of high-speed ferries (APT James and Bucco Reef),” the document states.  The AMT2255 and the Mexico V ferries are slower and, according to the document, more economical to operate.

Barbados, which is forging closer bilateral relations in food production and supply, has not been included in any of the four routes in he proposal which states are Aita’s views and not necessarily ECLAC’s. Cheap transportation has long been identified by the 15-nation Caribbean Community (CARICOM) as a major constraint that is facing regional food production, distribution and consumption.

Trinidad and Tobago is named as the main hub, and St Lucia the secondary hub for the four proposed routes.

“This service proposal was based on the maritime trade already in place in the year 2019 between each location,” the proposal states.

According to the document, the routes were identified based on the profitability of each route per vessel as economic results of the implementation of the ferry service, without adding public benefits or any positive externalities for the impacted population. However, Mr Aito says there is room for public subsidies given social benefits and environmental impacts.

The document states that the operating costs for the faster ships are high, above all, due to the extra fuel needed to reach the higher average speed of navigation. At the same time, the ECLAC expert states that high-speed vessels have the necessary capacity to carry trucks, with which inter-modality could be implemented, and passengers will choose them over the slower options.  “Also, due to time and comfort factors, passengers tend to prefer shorter trips and less than one day of navigation, for which a high-speed ferry would be a better option. Additionally, he  says it will be important to consider ships with better performance and more environment friendly options.

The downside, however, is that travelling on faster ferries would be more expensive than airfares. “The high-speed vessels, however, require passenger rates of 2.71 dollars per mile to be profitable. This is almost 81% more expensive than the average rate for air transportation, and therefore could restrain the implementation of the service,” states the document titled “Proposal for the implementation of a ferry service through Public Private Partnerships (PPP’s) in the Eastern Caribbean Region.”

Comparing passenger rates based on the speed of the vessels, the ECLAC document says at 50% capacity utilization levels both for passengers and cargo, slower vessels are economically profitable on all four routes with the passenger rates of 1.06 dollars per mile,
the average in the Eastern Caribbean region. One exception is the Mexico V ship, which is not a high-speed vessel, and requires its capacity utilization levels to be maintained at 60% to be economically profitable on Route 4. The price of 1.06 dollars per mile is considered
very competitive because it is almost 30% lower than the average rate for the use of air transportation in the Caribbean, calculated at 1.50 dollars per mile, states the document which is part of ECLAC’s  bulletin titled “Facilitation of Transport and Trade in Latin America and the Caribbean.”

As a second option, the  study says implementation of Route 4 would be recommended to improve connectivity in the region. To be profitable, it would require a higher passenger transport capacity of at least 60% for the entire route and higher minimum rates of 2.71 dollars per nautical mile for the high-speed vessels.

Route 1 is not recommended in a first stage of implementation (pilot project) due to the long trajectory that it represents and its large time duration to be completed, the report states.

Mr Aito says for the Caribbean ferry project to become viable, CARICOM would have to be examine the Revised Treaty of Chaguaramas, which established the grouping,  to identify opportunities for improvement, facilitating the entry of work vehicles such as cargo truck and and ensuring free transit in the countries where the service would operate. Similarly, he says, customs and immigration regulations for the flow of goods and people should be reviewed and improved to speed up the process and reduce transaction costs.

In the area of port capacity is another key success factor, the ECLAC document states this has to be addressed to ensure that the time needed for the ships to remain in ports is as short as possible for better operation efficiency.

Other constraints identified in the UN agency study include lack of updated data in the Caribbean  which could be addressed through a second study to obtain precise demand statistics and conduct first-hand inspections of selected ports, and the undermining possible economies of scale due to intra-regional logistics associated with the large number of islands. Another limitation for the implementation of the ferry service in the Caribbean that has been identified is the lack of efficiency in port infrastructure, measured in terms of availability of port equipment, labor, information systems, fluidity of the processing of ship arrival information and registration of passengers and merchandise.