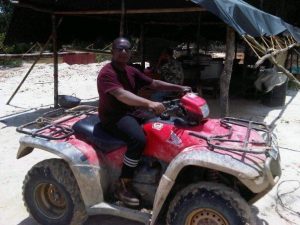 Two brothers on Sunday- Christmas Day-  confessed to the killing of well-known interior Land Surveyor, Ricky Oswald Ambrose, after he allegedly shot at their camp and threatened to kill them if they did not move from the land on which they were working, police said Monday.

Investigators said Randel Layne and Mario Moses confessed that they waylaid Ambrose,40, on October 18, 2022 after he allegedly went to their camp and told them that they must move from the land on which they were working at Arimu. The murder suspects further alleged that Ambrose, who was a ranger for Alphonso Mining, shot one of their pumps and threatened to kill them if he returned and they had not moved.

Police said Messrs. Layne and Moses also told detectives that they later armed themselves with two pieces of wood, went into the trail and waited behind a tree for Ambrose who was expected to pass on his All Terrain Vehicle (ATV).

“When the deceased approached on his ATV, one struck him off the ATV and the other dealt him several stabs about his body. They then took his firearm and walked through the bush and threw it in a creek and thereafter returned to their camp,” police said.

The Guyana Gold and Diamond Miners  Association (GGDMA) had previously criticised police for their apparent “poor” response to the crime scene, causing the law enforcement agency to explain that police had received the report of the incident several hours later, had experienced mechanical difficulties with their ATV and had cause to overnight near a creek which they crossed early the next day and headed to the crime scene.

Ambrose, who resided at Lot 3093 Profitt’s Square, South Ruimveldt, Georgetown, was hailed as someone who had provided great support to miners over the past 20 years and he was well-known in all mining districts.