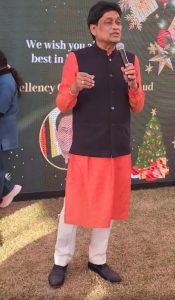 Outgoing Guyana High Commissioner to India, Charrandass Persaud has publicly apologised to an well-known professor and animal rights activist in that Asian nation for verbally abusing her, but said it boiled down to women’s desire for equality with men.

Recounting his altercation with Professor Sonya Gosh on August 1, 2022, he said “it’s a confession, it’s an admission and it’s an apology”.

“I apologise to the People of India, to the Prime Minister, to my colleagues who are all diplomats- many of you are here-, to my government and the President in particular,” he said.

Though President Irfaan Ali on October 26 announced Mr Persaud’s departure from the post as High Commissioner to India, he was seen speaking against a backdrop at a Christmas Day function that described him as “His Excellency Charrandass Persaud”. But Mr Persaud said in those remarks that that incident contributed to the “reason why I’m leaving India at such short notice or after such a short time.”

Mr Persaud said he was not recalled but admitted to the President that he was wrong, would take the “flak” and leave India, and the President asked “re you sure you want to return to Guyana?”. “I said ‘yes because the people from various walks of life will literally take the hair of your head.”

“I did what I did out of anger. and I’ll say this now. I have to because, as High Commissioner, I represent a Nation, I represent a People…What I did as High Commissioner was wrong…I owe my friends, my colleagues an apology for behaving in a manner not becoming of a diplomat. I was angry, I did not exercise diplomacy,” he said, adding that President Ali and Indian’s Prime Minister Narendra Modi had approved of him, like they usually do for other envoys, and he presented his credentials on March 17, 2021.

However, he said it was she who first hurled expletives at him while enquiring about one of the 60 stray dogs in the area. He said that one of the dogs had usually entered his yard and made a lot of noise and so he and others had decided to take it far away from his residence. “At night he would make me up. I don’t have anything against dogs but I have a lot against dogs making a hell of a lot of mess in my yard,” he said.

Mr Persaud’s account was that  after the security guard opened the gate and then went to contact him, Dr Gosh allegedly barged in behind him right up to his door and banged on it before she exited with the assistance of the guard. Mr Persaud said when he went outside and asked her what she was doing in his yard, she  used indecent language to him when he told her that he did not have a dog. “You would not believe, I was surprised at the expletives she handed me- the ‘F’ and the ‘S’ and you are such a so-and-so dog and I have to admit that I responded in kind.

Mr Persaud was seen and heard in a video verbally abusing a woman who was enquiring about a specific dog that she usually feeds but was told that the man had chased away. “I don’t need a dog in my yard alright. You want a dog? Take it and out between your leg. You probably want the dog to …. you. That’s what you want. I don’t care who the hell you are. F… you,” the man said.

The man then turned to a man and cautioned him against allowing any woman entering his yard bef0re  he suggested to the person who was video recording the altercati0n that “you like your camera?”.

However, Mr Persaud remained unapologetic in squaring off with women during disagreements,  strongly indicating that personally he would have no qualms doing it again.

“As Charrandass Persaud, an individual, I strongly stand up equal to any woman. If you want to fight, if you want to curse, you want to dance, I am ready so please, if you want to judge me, you may hear stories but this is the real story. I did, in fact, hurly abuses after she (Professor Gosh) abused me because I believe in equality but, as High Commissioner, it should not have happened,” he said.

“I believe- all of you women here would love to be deemed equal to men; you have equal facilities and everything. Well, if you’re in a fight and you pick a fight with a man, he should say ‘no, you’re a woman, I’m not going to fight with you?’ You want equality, let’s go to fight and see what happens,” he said.

Mr Persaud ruled out being a diplomat again. “The wrong that I may have done is done. We can’t undo that. What I do know that it will not happen again; that I will never be a diplomat again so, as a non-diplomat, I can get into fights.”

Mr Persaud, a former member of the Alliance For Change (AFC), first emerged as a high profile person in 2018 when, as a coalition government parliamentarian, he had voted in favour of a People’s Progressive Party (PPP)-sponsored no-confidence motion that had led to the David Granger administration becoming a “caretaker” until elections were held in March, 2020.