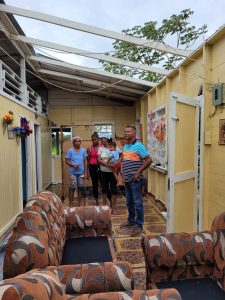 A house roof was blown off and several other houses were damaged by high winds on the West Coast Demerara early Sunday morning, and already assistance is on its way, an official said.

Region Five (Mahaicony-West Berbice) Representative,  Faizal Jafferally told Demerara Waves Online News that a house roof was blown away and zinc sheets from  four other roofs were removed by the storm at Number 9 Village.

He said the roof of the badly damaged house was being replaced up to late Sunday. He promised that the other houses would be repaired on Monday. “As it relates to the house that lost its entire roof, I was able to respond and they have started repairing it,” he said.

Mr Jafferally said only Number 9 Village was affected by the storm that occurred shortly before 5 AM.

All of the affected dwellings are wooden, but a number of them are shacks.